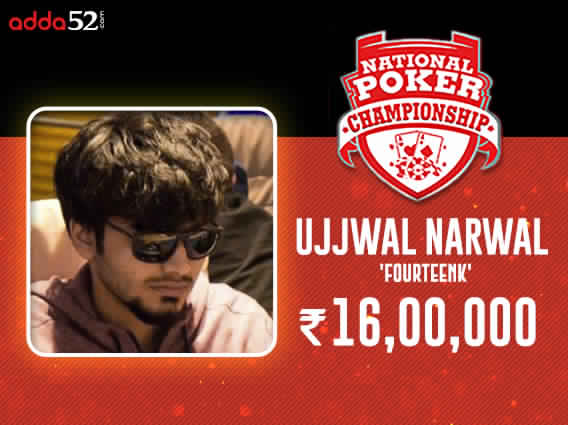 
After a slew of satellites, state qualifiers and 3 starting flights, Adda52’s National Poker Championship or the NPC came to a successful end with the champion being declared yesterday. The total number of entries from all the flights came to a staggering 4,241 entries (1,353 from 1A, 1,261 from 1B and 1,627 from 1C).

The last day of the NPC happened yesterday, where a total of 383 players played tooth and nail for the kill-shot first-place cash prize. However, Ujjwal Narwal aka ‘fourteenk’ denied them all the title and earned a staggering INR 16,00,000 out of the guaranteed INR 1 Crore prize money. A total of 382 were paid out of the prize pool, with a min-cash of INR 8,280.

He beat ‘tenfiveftw’ in heads-up to secure the victory. The latter won INR 10,50,000 as runner-up prize money. Rounding up the top 3 places was Kanishka Samant aka ‘kanishka27’ for INR 7,50,000. Samant also shipped the INR 10 Lakhs Europe package playing the Destiny 8.0 SNG Finale on Spartan last night.

Coming to the winner, Narwal is a regular online grinder. Some of his recent achievements include PokerBaazi Endeavour and Add52 Whale, both titles earned last year. Him winning the NPC for that amount surely must mean a lot for him and some would even say that it is a life-changing win.

Keep reading GutshotMagazine.com for more such tournament round-ups, results and for other such updates from around the world.