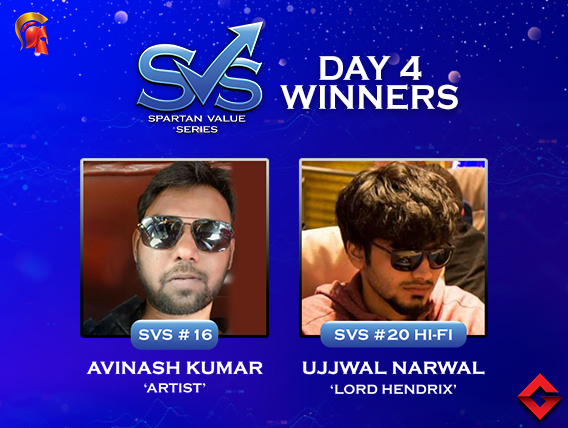 The first tournament came with the lowest buy-in of INR 110 and 279 players took to their seats. The displayed guarantee was passed, generating a bigger prize pool of INR 27,900 which was eventually shared among the top 20 places with each one ensured a min-cash of INR 373. The first title of SVS Day 4 belonged to Avinash Kumar aka ‘Artist’ after beating ‘TheShowdown’ in heads-up to grab the winner’s prize of INR 6,696. The tournament completed in level 32 after Kumar flipped over his straight against his opponent’s pair of Aces.

The second tournament of the day saw the buy-in step a little higher to become INR 275, attracting a total number of 182 players. Only a smaller chunk of 17 places ended in the money for a min-cash of INR 863. Dominating the field was SVS Day 3 Event #13’s winner ‘radda’ who beat ‘tripacesontop’ in heads-up with his higher pair of Aces against his opponent’s single pair of Tens.

As the tournament progressed, the third event attracted 143 players entering for a buy-in of INR 385. The top 13 places were paid out a minimum cash of INR 1,127. ‘varun5379’ emerged as the champion of the night after winning the third tournament of the day and railing out the winner of Event #16 Avinash Kumar aka ‘Artist’ in heads-up with his higher two pairs of Aces and Queens over Kumar’s Queens and Sixes.

The guaranteed amount keeps increasing as the day progresses. The second last event saw 211 players entering for a buy-in of INR 770. It was ‘HATSOFF’ who claimed the title after the players struck a heads-up deal. With him carrying the larger stack announced the official winner of the fourth tournament, sending away ‘notoriousB.I.G’ to the runner-up position.

Hi-Fi is a regular tournament hosted at the end of the day always attracting a good field and this time 294 players entered, and each paid a buy-in of INR 1,650. Walking away with the enormous prize money was a prominent face in the poker circuit Ujjwal Narwal aka ‘Lord Hendrix’ who knocked out Sandeep Varma aka ‘effuno’ in heads-up.

Down to the final two players and after hours of the grinding session, the competition reached level 40. Narwal holding Ah Td playing against Varma holding 9c Js. The latter shoved pre-flop and got a call from the former. The board ran 5h 7c 2h 3h 6h and that’s how Narwal managed to draw a flush to rail out his opponent who only had a high card Jack.

Growing popular ever since its commencement, the Millionaire Lite guarantees INR 10 Lakhs to the top player. This low buy-in tournament once again attracted a pretty good field of 528 entries on Day 1B for INR 1,650 only! Eventually, after hours of grinding, circuit reg Sagar Choudhury aka ‘Gal Godot’ amassed the biggest stack of 2,62,292, closely following the chip leader was Deb Mathur aka ‘debumathur’ with 2,23,054 chips.