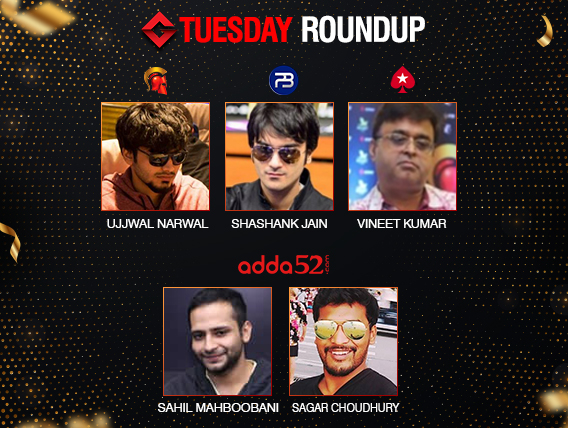 
Truly, the virtual felts experinced a surge of players last night crushing the advertised guarantee of the marquee events! Spartan Poker’s tuesday tounrnaments were a part of the ongoing Spartan Super Series (SSS) and the biggest one was Mega Stack assuring INR 22 Lakhs in prize pool. On the other hand, PokerBaazi promised INR 15 Lakhs in The Endeavour and Adda52’s Hexagram and Hitman also performed quite well. To know more about the Tuesday night and winners across the major platforms, read below…

Another event taking place at 9:30 pm on Spartan Poker was The Race INR 8 Lakhs GTD which had a fixed buy-in of INR 1,650. Out of the total 679 entries the top 63 finishers ended up earning a min-cash from the bigger prize pool of INR 10.18 Lakhs. After 8+ hours of intense grinding session, it was circuit popular Ujjwal Narwal aka ‘Lord Hendrix’ to grab the title along with INR 3.74 Lakhs in prize money. Ultimately, ‘parthaagarwal’ ended up earning the second place payout.

PokerBaazi’s Tuesday tourney The Endeavour INR 15 Lakhs GTD attracted a total of 566 runners after each of them paid INR 3,850 as buy-in. Eventually, the tournament guarantee was crushed to create INR 19.81 Lakhs in prize pool. At 3:37 am, Shashank Jain aka ‘Westworld’ captured the first-place prize money defeating Adithiyya Sb aka ‘Bezerk1’ in heads-up for INR 3.74 Lakhs while his opponent settled in the second place for INR 2.62 Lakhs.

At 8 pm last night on Adda52, Hitman INR 7.5 Lakhs GTD kicked off drawing a total of 323 pentrants for INR 4,500 buy-in. Once again, the assured amount was crushed to become INR 10.33 Lakhs in prize pool which was benefited by the top 34 finishers. Topping the list and claiming the first-place prize money of INR 2.58 Lakhs was Sagar Choudhury aka ‘alwaysnutz’ who also collected 6 bounties on his way. Choudhury eliminated ‘sanchit1990’ in heads-up who secured INR 1.56 Lakhs.

A well-known circuit grinder, Sahil Mahboobani aka ‘ImHighIshove’ rode past the field on Adda52’s Hexagram INR 2.5 Lakhs GTD. The event began at 10 pm sharp and a total of 187 entrants joined the field eventually bringing the prize pool to INR 3.74 Lakhs. Mahboobani seized the first-place prize money of INR 63,570 while his opponent ‘poketacesaa’ settled in the second position for INR 63,500.

PokerStars’ Tuesday flagship tournament, Sixth Sense INR 6 Lakhs GTD commenced at 7:30 pm attracting a total of 307 runners who paid INR 2,750 buy-in amount. Eventually, the tournament ended with a 3-way deal that saw Vineet Kumar aka ‘TheMentalistNo1’ finishing in the first-position and pocketing INR 1.26 Lakhs as top prize. Kumar was followed by Vikram Mishra aka ‘GreenSTUFF79’ in the second place and ‘nomnomnom18’ in the third position.