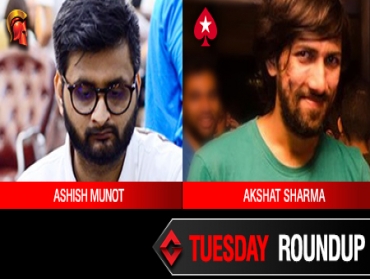 
The poker aficionados had an interesting start to the week as you can witness the guarantees climbing up the ladder. The biggest tournament last night was Spartan Poker’s Mega Stack promising INR 25 Lakhs GTD also Daily Hi-Fi put down by IOPC on the same platform guaranteeing INR 15 Lakhs followed by The Endeavour on PokerBaazi and so on. And here is a quick summary on Tuesday majors…

By now the Indian poker fanatics know all about IOPC and last night’s feature Mega Stack INR 25 Lakhs GTD was a part of IOPC Event #29 on Spartan Poker. Recording a massive field of 1,141 entries with each one chipping in INR 3,300, eventually smashed the advertised guarantee to become INR 34.32 Lakhs in the prize pool. The top 111 finishers walked out with a portion from the same along with a min-cash. After intense hours of grinding, at 4:05 am, the tournament crowned ‘Conclusion0011’ the IOPC title after railing out IOPC Elite winner Bheem Singh Meena aka ‘TymTravel’ in heads-up.

The 2019 WPT India Main Event winner Ashish Munot took down Spartan Poker’s Daily Hi-Fi INR 15 Lakhs GTD that was also included in the ongoing IOPC series. Crushing the displayed guarantee to become INR 21.75 Lakhs, the top places earned themselves a min-cash. Making 5-figures for his efforts, Munot plays under the username ‘Donkey 07’ added another valuable title after railing out Samay Modi aka ‘Limitless’ in heads-up.

Munot championed the Daily Hi-Fi dominating Modi in level 30 of the tournament with his higher two pairs of Queens and Fours over the latter’s Jacks and Fours.

442 runners registered themselves after each one paid INR 3,850 to enter The Endeavour INR 15 Lakhs GTD on PokerBaazi. Once again, the tournament guarantee surpassed, and the top 54 players benefited from the prize pool. But the one to grab the largest portion from the same was Sanket Jain aka ‘aslipapaji’ who secured INR 3.10 Lakhs in prize money only after he defeated Amarjeet Singh aka ‘superchor89’ in heads-up. Singh, the recent Destiny 12.0 SnG Finale champ added INR 2.17 Lakhs for settling in the runner-up position.

Adda52 hosted Hitman INR 7.5 Lakhs GTD, a bounty tournament. This Tuesday featured caught the attention of 293 entries, each paying a buy-in of INR 4,500. Topping the list and claiming the day was an anonymous player ‘tyche’ who eliminated ‘phoenix66990’ in heads-up and grabbed INR 2.4 Lakhs along with 10 bounties on his way! However, the runner-up earned INR 1.4 Lakhs.

The guarantee was surpassed and the 30 players to receive a pay check includes Naren Purohit aka ‘IMUNGAI’ (3rd), Abhishek Chhajer aka ‘abhiom’ (7th), Aditya Sushant aka ‘A_Sushant’ (12th), Neel Joshi aka ‘neeljoshi23’ (13th), Sandeep Varma aka ‘effuno’ (23rd), Ayush Garg aka ‘lazyman’ (24th) and others.

For a buy-in of INR 2,750 in PokerStars’ flagship tournament Sixth Sense INR 6 Lakhs GTD, 264 players entered. Before the tournament came to a standstill, the top 47 places strolled out with a min-cash, a share from the prize pool. Eventually, after hours of grinding, it was Akshat Sharma aka ‘takingcuntrol’ who was announced the official titleholder seizing INR 1.06 Lakh after a heads-up deal pushing away ‘GutshotHaiBro’ in the runner-up position who took home INR 1 Lakh