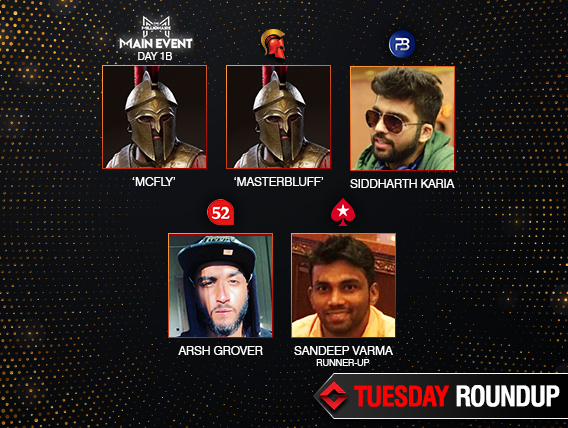 
Two days into the week, the Tuesday flagships offer a relatively bigger guarantee and the action too picked up pace. Halfway through Spartan Poker’s India Online Poker Championship (IOPC), the action is heating up on the online felts and yesterday was second of eight starting flights of IOPC Millionaire Main Event. Other headliners include Spartan Mega Stack INR 25 Lakhs GTD followed by The Endeavour on PokerBaazi and so on. Here’s a complete summary of the Tuesday majors…

The Millionaire Main Event (Day 1B)

Displaying INR 3 Crore GTD, The Millionaire Main Event is a part of the ongoing IOPC series. The most favoured and the biggest tournament series in the country saw a surge of players last night that wrapped up Day 1B, second of its eight starting flights. 344 runners enrolled themselves after each one paid a buy-in of INR 11,000. After 4+ hours of intense grinding, we saw ‘McFly’ with a towering stack of 285,688. Following the chip leader is another prolific poker talent in the 2019 WPT India Main Event champ Ashish Munot aka ‘Donkey 07’ with 200,734 chips and Sanat Mehrotra aka ‘mehro2511’ bagging 194,156 chips, rounding off the top three finishers of this second starting flight.

Running alongside The Millionaire Main Event Day 1B was the Mega Stack INR 25 Lakhs GTD on Spartan Poker that pulled in a total of 988 entries which was enough to crush the advertised guarantee to have INR 29.64 Lakhs in the prize pool to be shared among the top 95 finishers. Conquering the field was ‘masterbluff’ scooping the IOPC title after defeating ‘PirateMihawk’ in heads-up.

A total of 469 contenders registered in PokerBaazi’s The Endeavour INR 15 Lakhs GTD. These players ponied up a buy-in of INR 3,850 to participate which helped the pool cross the guarantee to create the final prize pool of INR 16.41 Lakhs out of which the top 54 places earned a min-cash. Siddharth Karia aka ‘schemer’ topped the field and pocketed INR 3.29 Lakhs in prize money only after beating ‘Apocalypto’ in heads-up. The runner-up managed to earn INR 2.31 Lakhs for his efforts.

Tuesday night on Adda52 is dedicated to Hitman INR 7.5 Lakhs GTD and last night lured a field of 262 entries with each one chipping in INR 4,500 buy-in. It took more than 6 hours to announce the last man standing and after the dust had settled we had a well-known circuit grinder Arsh Grover riding past the field to capture the first-place prize money along with 8 bounties on his way to secure INR 2.17 Lakhs in prize money. Grover popularly known ‘BigggTymeR’ railed out ‘kunalsunny’ in the runner-up position which netted the latter a payday of INR 1.29 Lakhs.

The guarantee amount was surpassed to create a bigger prize pool of INR 8.38 Lakhs from which the top 27 finishers profited quite well including Chirag Bhardwaj aka ‘mahikk’ (3rd), Sagar Choudhury aka ‘alwaysnutz’ (14th), Honey Bijlani aka ‘ho9ey’ (25th) and so on. It was a good night for Siddharth Karia aka ‘skaria1’ who added this 8th place finish to his Endeavour title win at PokerBaazi.

After firing three bullets, the anonymous online reg ‘hzgod’ took down Sixth Sense INR 10 Lakhs GTD on PokerStars. The champion outlasted a field of 193 entrants, each one of whom entered paying INR 4,400 buy-in. Eventually the prize pool was shared among the top 35 finishers who walked out with their min-cash. ‘hzgod’ beat runner-up Sandeep Varma aka ‘effuno007’ to capture the top prize of INR 1.88 Lakh while Varma managed to bag INR 1.39 Lakh.