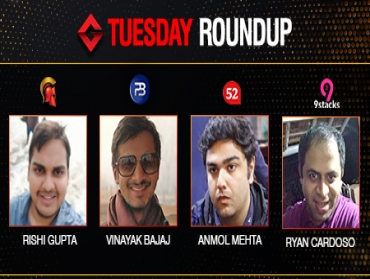 
We are two days into the week and undoubtedly, the action-picked up the pace as Spartan Poker introduced double feature, The Race INR 7.5 Lakhs GTD running simultaneously with Mega Stack INR 20 Lakhs GTD. Other events too, Endeavour INR 15 Lakhs GTD., Hitman on Adda52 and so on crowned their worthy winners and here is a complete summary of Tuesday majors…

A popular Tuesday tourney on Spartan Poker, Mega Stack INR 20 Lakhs GTD began at 8 pm. The entire event fetched 655 entries after each paid INR 3,300. The top 63 finishers earned a share from the prize pool but the one to take away the largest chunk was online reg Rishi Gupta aka ‘BollywoodNight’ after the players settled for a heads-up deal in level 49 which eventually saw ‘Expert’ in the runner-up position.

Among the few notable players ending in the money include Vivek Singh aka ‘KasolHieghts’ (3rd), Naren Purohit aka ‘IMUNAGI’ (16th), Srihari Bang aka ‘bangbang99’ (19th), Vidwath Shetty aka ‘RoronoA’ (29th), Jayjit Ray aka ‘David Blaine’ (34th), Ankur Sehgal aka ‘Crimemastergogo’ (58th), Shardul Parthasarathi aka ‘F – Bomb’ (63rd) and so on.

Spartan Poker’s double feature, The Race INR 7.5 Lakhs GTD kicked off at 9:30 pm attracting a pretty good field of 550 entries after chipping INR 1,650. This number was enough to cross the guarantee and collect INR 8.25 Lakhs in prize pool, a portion of which was shared among the top 47 places. Capturing the first-place prize money was ‘gogobhai’. In level 49 of the tournament, the players struck a heads-up deal that saw Siddharth Karia aka ‘schemer77’ in the runner-up position and ‘gogobhai’ with his larger stack of 2.9 million grabbed the first title of The Race!

The Tuesday feature on Adda52 was Hitman INR 7.5 Lakhs GTD that caught the attention of 216 entries after each paid INR 2,500 buy-in. Topping the list was circuit grinder Anmol Mehta aka ‘anzzzzz’ who defeated Sandeep Varma aka ‘effuno’ in heads-up to win INR 2.05 Lakhs.

A total of 200 entries pounced on the field after paying INR 2,750 in PokerStars’ Tuesday flagship Sixth Sense INR 6 Lakhs GTD. Coming on the top was ‘hardyindin’ who added INR 1.07 Lakhs after a heads-up deal with Abhijeet Kumar aka ‘sexylady7766’ in the runner-up position who secured INR 89,413.

A part of the 9stacks’ Super Series, the 9SS Leaderboard Tournament began at 6 pm on Tuesday that saw 38 hopefuls taking their seats out of which only the top 5 finished in the money locking INR 20,000 in min-cash. It was Ryan Cardoso aka ‘AnAAKKonda’ who beat ‘Krishan97’ in heads-up, pocketing INR 75,000 in prize money while his opponent earned the second-place payout of INR 50,000.

For mroe updates on daily winners and other poker tournament taking place around the world, keep reading GutshotMagazine.com and stay tuned!