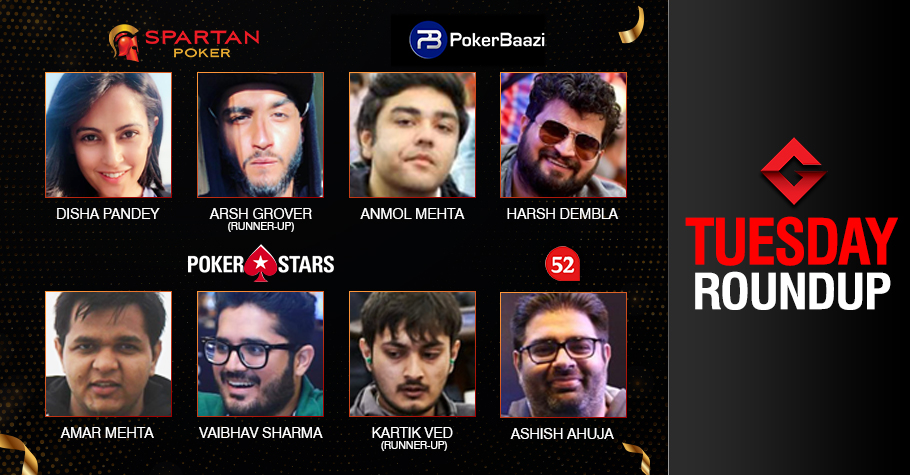 
Another day in the online poker world that saw slightly bigger guarantees than Monday night. The star performer has to be Ashish Ahuja shipping three consecutive events in a matter of three days. In Tuesday Roundup we will be covering major events of Tuesday on Spartan Poker, PokerBaazi, Adda52 and PokerStars India. So keep reading to find out the notable winners…

On Tuesday night, Spartan Poker hosted Mega Stack INR 20 Lakh GTD which attracted 687 entries. After chipping in INR 3,300 which led to the creation of INR 20.61 Lakh in prize pool, the top 63 players walked out with a minimum cash. After 8 hours, Disha Pandey aka ‘shahzzadi’ emerged as the champion while Arsh Grover aka ‘BigggTymeR’ clinched to the second place payout. Manish Lakhotia aka ‘thekid’ and Arjanveer Chadha aka ‘bazzingaa’ finished in the 4th and 3rd position.

A prize pool of INR 8.37 Lakh was accumulated in Spartan Poker’s The Race INR 7.5 Lakh GTD. The event pulled in 558 hopefuls hunting for the first-place prize money. The top 47 places finished in the money but the one to capture the lion’s share was ‘Hondrick’ who topped the field while his opponent ‘steamin’ ended up securing the second place payout.

Completing a hattrick, Ashish Ahuja aka ‘rocky3705’ took down AOPS Win The Button PKO INR 5 Lakh GTD on Adda52. The champion won three consecutive flagship events across the platform. A total of 181 entries registered to the event and ultimately Nishaanth S aka ‘superdeluxe’ had to end up in the second place, failing to dominate Ahuja in heads-up play. The winner bagged INR 1.4 Lakh in first prize.

The INR 2,200 buy-in Tuesday MonsterStack INR 3 Lakh GTD drew 136 entries last night on PokerBaazi. Outlasting the competition was Harsh Dembla aka ‘100crdream’ who walked away with INR 80,400 in prize money while ‘pizzakhanahai’ secured INR 56,310 earning the second position for his efforts.

After finishing second in The Endeavour (read above) Vaibhav Sharma rode past a field of 187 entries to take down Super Tuesday INR 5 Lakh GTD on PokerStars India last night. Sharma aka ‘GTO_LIFE_GG’ claimed INR 99,391 for his victory. ‘MeraDeshMahaan’ banked the second place prize money for ending in the 2nd place for INR 74,125.