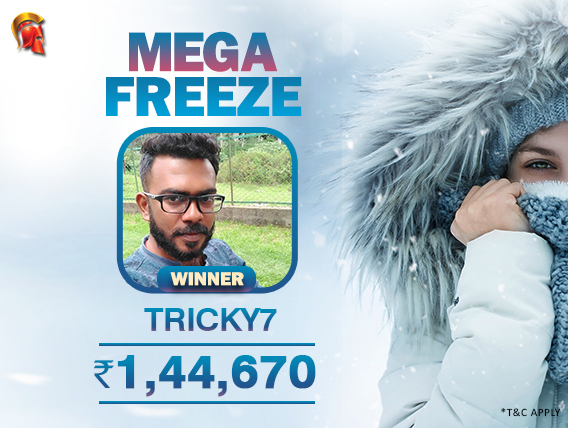 
The Spartan Poker hosts some of the best structured online poker tournaments for poker players in India and the Mega Freeze is one such tournament, played every Monday at 7:30 pm IST. The freezeout tournament has a buy-in of INR 5,500 and a guaranteed prize pool of INR 5 lakh, which is quite attractive to players looking to win big.

Yesterday’s Mega Freeze tournament saw a total of 115 entries, which beat the promised prize pool, creating a new prize pool of INR 5.75 lakh, which was to be paid out to the top 17 players with a minimum cash prize of INR 9,028. The tournament lasted slightly over 4 and a half hours and ultimately, it was Vivekanandan aka ‘Tricky7’ who walked away with the top prize. The 31-year old is from Erode in Tamil Nadu and is a recreational poker player.

For outlasting all the other entries, ‘Tricky7’ took home a cash prize of INR 1,44,670, while the runners up ‘KakeGuri’, who lost in heads-up, took away a prize of INR 97,750 for second place. There were quite a few other notable players on the final table, including Mithun ‘ThePokeRaja’ Mahesh who finished 3rd for INR 63,538, Rubin ‘kornkid’ Labroo who finished 6th for INR 33,465, and Mani ‘KOQ’ Singh who finished 7th for INR 25,588. What a tough final table that must’ve been!

Coming into the final hand of the tournament, both players were almost equal in chips, with Tricky7 slightly ahead. The blinds were running 4,000/8,000 – 1,000 as KakeGuri went all-in after seeing the river card, with two pairs – Kings and Twos on the board. Tricky7 held pocket eights which made his two pairs superior – Kings and Eights, which gave him the title as well.

Featured tournaments take place every day on The Spartan Poker and you can take part in them too, to become the next big winner. Keep reading GutshotMagazine.com to see daily updates on big poker tournament winners from India and around the world.