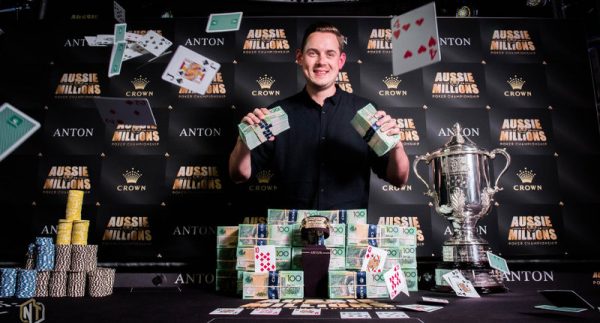 
The Aussie Millions is the biggest poker tournament series in Australia and everyone was excited about the 2018 Aussie Millions series, which kicked off on 17th January 2018. The highly anticipated Main Event started on 28th January and finished on 4th February, with England’s Toby Lewis walking away with top honours.

Toby Lewis is a 28-year old professional poker player who has been playing the game for almost a decade. Yesterday, he was crowned champion of the 2018 Aussie Millions Main Event, after having outlasted a total of 800 entries which was a record for the Aussie Millions, beating the field of 781 of 2008.

He went into the final day with the chiplead and had the best live poker record on the final table, with Michael Del Vecchio being the next best player with $1,495,234 in live earnings and a WPT title to his name as well. A 3-way deal was cut between Lewis, Espen Solaas and Stefan Huber, leaving AUD 75,000 and the title to play for.

Lewis dominated play throughout the day, having a 2:1 chiplead going into heads-up play with Huber. This stage lasted only 16 hands when both players went all in and the board opened out Q-Q-8-7-5. Huber’s A-8 turned out to be no match for Lewis’ trip queens, holding Q-10. This won him the pot and the 2018 Aussie Millions Main Event title!

Keep reading GutshotMagazine.com to stay updated on big poker tournaments from around the world!