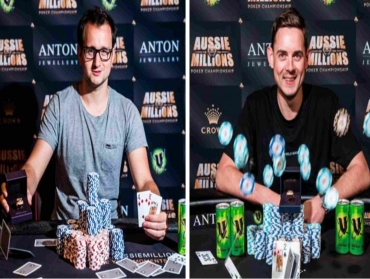 
The 2019 Aussie Millions began on a good note in Melbourne. The series started on 15th January and will run till 4th February 2019, a period of 20 days. The event to kickstart the event was won by local pro Muhammad Asad for AUD 219,980. Canada’s Ari Engel also earned his 2nd Aussie Millions ring.

The Main Event of the series is also underway, where Paul-Francois Tedeschi was in the lead on Day 1A. In addition, the $25k and $50k Challenge Events were some of the significant ones to declare its champions in the series till now. Here’s a round-up of both the events. 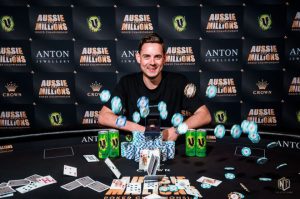 The event started on 27th January and was in the books yesterday. England’s Toby Lewis won the event for AUD 818,054 (~INR 4.17 Crores) after a head-up deal with German pro Manig Loeser. Lewis now sits with over $6 million in total live earnings.

He is also the 2018 Aussie Millions Main Event champion and had made his best live score for AUD 1,458,198. He is well-established in global poker circles and is currently 9th in England’s All Time Money List. The player also ranked 2nd in 2018 WPT LA Poker Classic ME for $600,630. What’s more impressive is that he also finished 2nd in the AUD 25k Challenge which was won by Rainer Kempe.

After the tournament, Lewis said, “I’m just very fortunate. I think I played good and ran good. I didn’t even intend on playing it; I was so tired after the AU$25,000 Challenge. But it looked like such a good event; it got so much more players than last year so kinda felt the need to jump in and the guys were willing me in, so I just went for it.”

Speaking about the tournament crowd, he added, “It’s easy to say that having the recreational players here helps, but the thing is they started it. They were there from the start so, with that, it draws a lot more attention to the event.”

After a long Day 2, the unscheduled Day 3 began with five players. The shortest stacked player Thomas Muehloecker doubled twice through Bjorn Li and Dominik Nitsche. Li was eliminated by Lewis at 5th place for AUD 235,600. Next to fall was Nitsche at 4th for AUD 323,950.

In the 3-way battle, Muehloecker shoved from SB holding Ace-king and Lewis called with pocket Sixes. A six on the turn made Muehloecker settle for 3rd place cash prize of AUD 412,300. A couple of hands later, both the heads-up opponents agreed to an ICM chop and Loeser collected AUD 772,246. 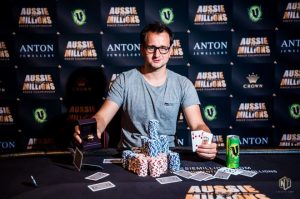 This event got over a couple of days ago. German pro Rainer Kempe bagged the 1st place title and the cash prize of AUD 826,465 (~INR 4.21 Crores) after a heads-up deal with the champion of the AUD 50k Challenge and 2018 Aussie Millions ME winner Toby Lewis.

Kempe had come close to bagging the Aussie Millions ring back in 2015 but succumbed to Natural8 Pro Michael Soyza in the Accumulator event. With this win, Kempe will finally don his first ANTON ring. Kempe is now with over $19 million in live cash earnings with this win.

He is fresh and in full form after having shipped one of the 2019 PCA tournaments – Single Day $50k HR – for $908,100 this month. After beating David Rheem, winner of PCA ME this month, at 3rd place, the heads-up deal with Lewis happened, and the latter had to settle for AUD 566,074 as his share.

Kempe reacted to the press after his win saying, “It’s really cool. I was kind of close to winning an Aussie Millions ring in one of my first live deep runs so it’s nice to close this one out, so that’s awesome.” Day 2 of the event saw 29 players remaining and only 17 were paid. 2018 GPI Player of the Year Alex Foxen was among the noteworthy players who headed to the rail early in the day without cashing.

Keep reading GutshotMagazine.com for timely future Aussie Millions updates, results and for general poker news from around the world.