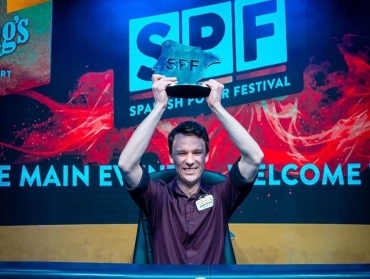 
Kings Casino in Rozvadov was heavily packed with poker players throughout the 8-day long The Indian Poker Series (TIPS) Season 3 in collaboration with the Spanish Poker Festival (SPF) in Rozvadov. All eyes were on the SPF Main Event comprising of 6 starting flights that crowned the winner yesterday. Israel’s Alexey Mishuk picked his trophy along with €58,765 in prize money after a 3-way deal.

It was a rollercoaster ride throughout the SPF €300,000 Main Event that garnered a total of 1,718 players, driving past the advertised guarantee to create €359,062 in prize pool. The money reached the top 175 places and each player was assured a chunk from the same for their efforts. The ultimate day had come after 5-days of intense grinding that saw 17 players taking their seats. It was Spain’s Yeray Perez who bagged a massive chip lead of 13.70 million followed by Ukraine’s Maksym Ryzhko with 7.97 million and Mishuk in third place with 7.52 million.

The final day began with the first casualty Frank Alain who went out in 17th place for €2,588. After a few elimination sessions, the nine-handed play began which saw Robert Bidlas settling in the 9th position. Gradually, with the fall of Alexander Sazhinov in the third place, heads-up got underway between Mishuk and Antonino Karman.

Karman with 7h 6s was up against Mishuk with Ac 5c and the board opened 4c 3s 2s Ad 10c, giving Mishuk a straight to top the Main Event list! The top 3 players were rewarded with the WSOPE Main Event tickets and Karman received €34,605 for ending in second place and Sazhinov with €24,338 in the third position.

For more updates on the poker industry and tournaments taking place around the world, keep reading and stay tuned to GutshotMagazine.com!