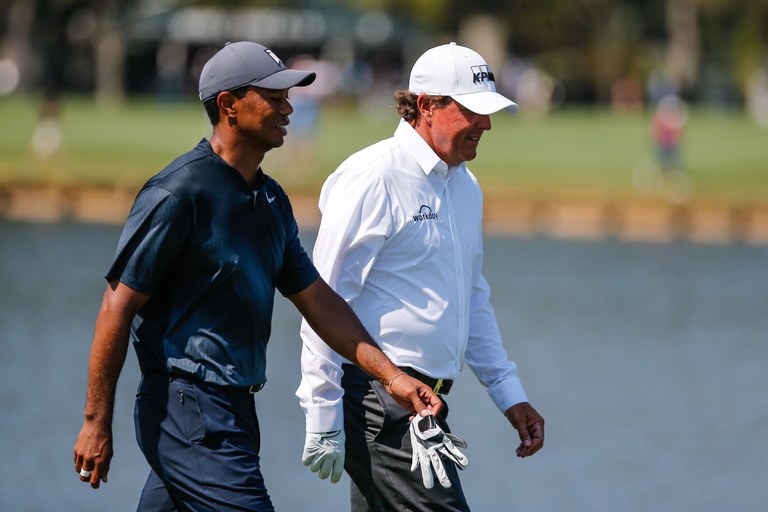 Tiger Woods and Phil Mickelson to play for $10 million


All eyes are currently on what’s happening in Las Vegas, with a prize pool of over $74 million up for grabs in the 2018 World Series of Poker Main Event. From the original field of 7,874 entries, the last 109 players remain, and the first-place winner of that tournament will walk away with $8.8 million.

While those players will spend days grinding in Vegas, another cash-rich exhibition match has been set up in another sport elsewhere in the world. Golf legends Tiger Woods and Phil Mickelson are reportedly in talks of playing each other in a winner-take-all match, worth $10 million (~INR 68.74 crore)!

While it isn’t official, there have been negotiations of an exhibition golf match between the two, since the Players Championship took place in May. Mickelson is said to have suggested to Woods to ‘skip the ancillary stuff of a tournament and just go head-to-head and just have kind of a high-stakes, winner-take-all match.’ The winner among the two will go home $10 million richer!

“I’m definitely not against that,” replied Tiger Woods when asked about the same back then. “We’ll play for whatever makes him uncomfortable.” However, both players’ agents have not made themselves available for any comments. The two have enjoyed a rivalry since years and this game could just take it all to the next level.

While this still remains only a possibility, it could turn out to be a sports gambling bonanza if it does really take place. It could turn out to be like the Floyd Mayweather and Conor McGregor fight that took place last year. Initial plans were to have the game played at the Shadow Creek Golf Course in Las Vegas on 3rd July, but that clearly didn’t go through.

We’re excited to see whether this idea could turn out to be a reality. For all updates on similar major sporting stories from around the world, keep reading GutshotMagazine.com.