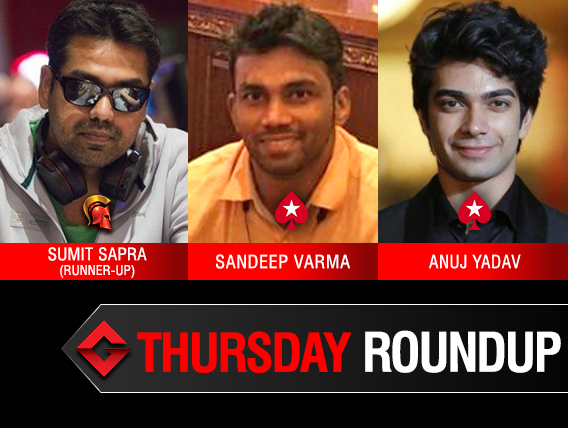 
We are just two days away from the weekend which means high-value tournaments and hefty bundles! And Thursday night is a warm-up for the poker admirers who are looking out to win big. As we stated, the popular online platforms of the country keep laying down crispier tournaments each day, one cannot miss out on Winter Series on PokerStars, currently underway with a massive INR 2.19 Crore GTD! And here is a complete summary of Thursday majors…

Spartan Poker dedicates Thursday night to Ultron INR 20 Lakhs GTD which pulled out 594 entries with each runner paying INR 4,400 as buy-in. And before the tournament halted, the top 55 finishers earned quite well for their efforts after the creation of a bigger prize pool of INR 23.76 Lakhs. It was 3:30 am when the ultimate champion was discovered bagging enormous prize money, ‘Yennefer’ who railed out Sumit Sapra aka ‘Sands Myth’ in heads-up.

PokerBaazi’s Thursday flagship tournament The Summit INR 15 Lakhs GTD enrolled a total of 278 players after paying INR 8,250. Eventually, the guarantee was surpassed generating a slightly higher prize pool from which the top 36 places were paid a min-cash. But the last man standing to grab the lion’s share was an anonymous grinder ‘tyrogambit’ who took down the tournament grabbing the winner’s prize of INR 4.60 Lakhs. The champion eliminated ‘Identity’ in heads-up who bagged INR 3.23 Lakhs for settling in the runner-up position.

Excelling Godfather INR 20 Lakhs GTD on Adda52 last night was ‘Nik898’ who climbed up the list to capture the winner’s prize money of INR 6.44 Lakhs only after the dust had settled and ‘Sandystorm’ was pushed out to the runner-up position who boosted his poker bankroll by adding INR 3.75 Lakhs.

The biggest guaranteed tournament of the Winter Series on Thursday night was Highroller INR 30 Lakhs GTD on PokerStars. A marvelous night that crushed the guarantee after pulling out 247 players for a buy-in of INR 15,000! The top 41 places earned quite well but the one to take away INR 6.46 Lakhs was ‘sneakysani’ who defeated ‘SANDYINC’ in heads-up to add another feather to his poker cap.

The seven-day long Winter Series on PokerStars displays INR 2.19 Crore GTD! Yesterday the 27th tournament Bigstack Turbo kicked off at 11 pm and the buy-in remained INR 1,100 attracting a total of 198 players who took their seats. The top 35 places strolled out with a min-cash of INR 1,769, a share from the prize pool of INR 1.98 Lakhs.

But the one to grab the largest chunk was circuit reg Sandeep Varma aka ‘effuno007’ who pounced to capture INR 37,188 after beating Harsh Dembla aka ‘kakori kabab’ in heads-up. Dembla finally settled for INR 28,050 for the runner-up position.

Anuj Yadav aka ‘brockLesnar95’ triumphed a field of 211 entries on PokerStars’ Winter Series – 28 Ultrasonic PKO INR 1.5 Lakhs GTD. Surpassing the advertised guarantee to create a prize pool of INR 1.68 Lakh, which was later shared among the top 35 places along for a min-cash.

Yadav railed out ‘Bezerkk1’ in heads-up and added another valuable title to his poker career by boosting his bankroll with INR 16,505 while the runner-up ended earning INR 12,208. From more updates on the top online poker tournaments and winners in India, keep reading GutshotMagazine.com!