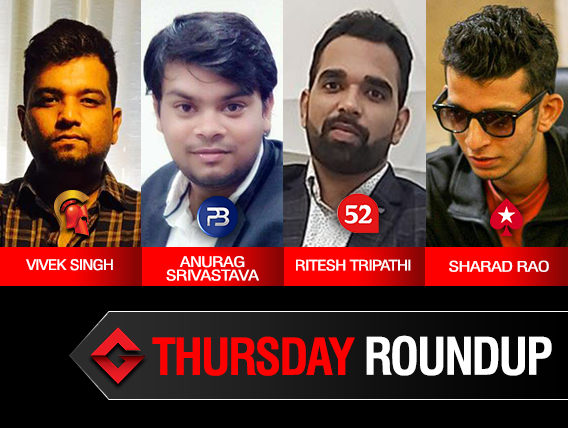 
We are past mid-week and the virtual felts are blazing fire! Undoubtedly, Thursday night was packed with terrific actions and some of the top names of the poker industry boosted their poker bankrolls. Last night, Adda52 put down the highest guaranteed tournament featuring INR 20 Lakhs followed by Spartan Poker’s Ultron displaying INR 17 Lakhs GTD. And now, let’s take a quick tour on Thursday majors…

Thursday night’s major attraction was Ultron INR 17 Lakhs GTD on Spartan Poker. A total of 414 players enrolled themselves after paying INR 4,400 buy-in. A few hours into the tournament saw the field whittling down and gradually the top 39 places finishing in the money, earning INR 11,730 as minimum cash. Eventually, the tournament halted with the star of the night, Vivek Singh aka ‘KasolHieghts’, a prominent face in the industry, seizing the title after railing out ‘tullupump’ in heads-up.

The tournament reached heads-up play, ‘tullupump’ with a stack of 886k playing against Singh with a larger stack of 7.39 million.

Singh raised pre-flop 6.5 million and ‘tullupump’ put his entire stack in the middle. The board ran 4h As 5c Jh 8h, which couldn’t help ‘tullupump’ stand and that’s when Singh flipped his pocket sixes to add another feather to his already illustrious poker cap.

Other notable players ending in the money include Ankur Sehgal aka ‘Crimemastergogo’ (3rd), Pranay Chawla aka ‘MajhiSatakali’ (10th), Tathagata Sengupta aka ‘RadioActivity’ (11th), Rubin Labroo aka ‘kornkid’ (20th), Raghav Bansal aka ‘thatssosick’ (25th), Arjanveer Chadha aka ‘bazzingaa’ (31st), Kartik Ved aka ‘TheInternetKid’ (35th) and so on.

Online reg Anurag Srivastava took down The Summit INR 15 Lakhs GTD on PokerBaazi last night to secure the winner’s prize money of INR 3.81 Lakhs. Srivastava playing under the username ’13anurag’ outlasted a field of 216 entries, each of whom paid INR 8,250 buy-in. The pretty good field was narrowed down and the top 27 places walked away with their share from the newly generated bigger prize pool of INR 16.20 Lakhs. The champion grabbed the title after defeating Ratul Steves aka ‘luna’ in heads-up. Steves finally managed to secure INR 2.67 Lakhs for the runner-up position.

Adda52’s flagship tournament Godfather advertised INR 20 Lakhs GTD but the displayed guaranteed was passed to create a higher prize pool of INR 22.45 Lakhs. A share of the same was later distributed to the top 49 players out of 449 entries. The tournament halted with online grinder Ritesh Tripathi taking away the largest chunk of the same and securing INR 4.57 Lakhs as the first-place prize money. Tripathi pushed away ‘krifard’ to the runner-up position where the anonymous player captured INR 4.18 Lakhs.

And what a night it was on PokerStars’ Highroller INR 10 Lakhs GTD attracting 130 runners in total for a fixed buy-in of INR 7,700. Powering through this field and claiming the day was PokerStars brand ambassador Sharad Rao aka ‘sordykrd’, giving an outstanding performance as the chip graph clearly shows. Rao railed out ‘modi chai wala’ in heads-up to boost his poker bankroll, adding INR 2.18 Lakhs as the winner’s prize money while the runner-up settled for INR 1.63 Lakh.

The top 20 places received paycheck including Ram Kakkar aka ‘TheLagLawyer’ (5th), Hitesh Batra aka ‘hiteshbhai999’ (7th), Faiz Alam aka ‘LFGgggg’ (9th), Dhinesh Kumar aka ‘you3betI4bet’ (14th) and so on.

From more updates on the top online poker tournaments and winners in India, keep reading GutshotMagazine.com!