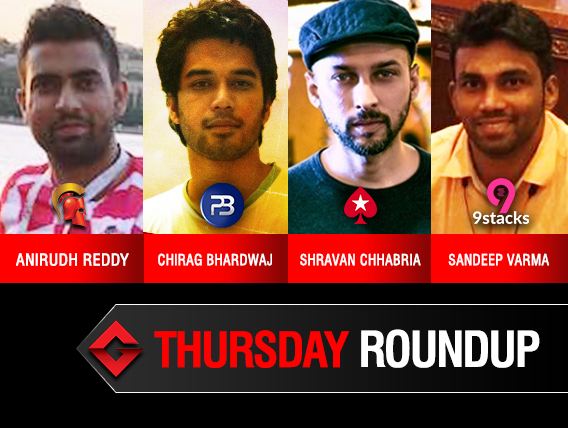 
We are just two days away from the weekend and the daily tournaments are buzzing with higher guarantees and last night saw some of the prominent names in the industry outlasting massive fields to boost their poker bankrolls. Spartan Poker hosted Ultron INR 20 Lakhs GTD followed by other two major attractions, The Summit and Highroller on PokerBaazi and PokerStars, respectively assuring INR 15 Lakhs in prize pool. Yesterday also saw the commencement of 9stacks Super Series. And here is a summary of Thursday majors…

Spartan Poker’s signature Thursday tourney Ultron INR 20 Lakhs GTD registered 519 runners after each paid INR 4,400 to enter. This drove past the guarantee to create a prize pool of INR 20.76 Lakhs and the top 47 places locked INR 11,833 as min-cash. The grinding session continued until 3 am and that’s when Anirudh Reddy aka ‘flash’ came out on top to win the hefty first-place prize money. Reddy defeated ‘paneerchilly’ in heads-up who pocketed a second-place payout.

The Thursday feature on PokerBaazi was The Summit INR 15 Lakhs GTD whose action picked up at 8 pm. With a buy-in of INR 8,250, a field of 269 entries registered to the event and by the end of it all, it was online regular Chirag Bhardwaj aka ‘Olandir’ who battled out Vaibhav Sharma aka ‘WakhraSwagNi’ in heads-up play to add a handsome INR 4.45 Lakhs in prize money. Sharma collected INR 3.12 Lakhs for ending in the runner-up position.

The advertised guarantee was crushed and Akash Shekhar aka ‘nikita69QQ’ (3rd), Eka Vedantham aka ‘gettingthere’ (7th), Hitesh Batra aka ‘hiteshbhai’ (17th), Sanat Mehrotra aka ‘mehro2511’ (24th), Goonjan Mall aka ‘gmtesting’ (33rd), Pranay Chawla aka ‘setmeup’ (36th) and few others ended in the money.

PokerStars’ headlining tournament Highroller INR 15 Lakhs GTD attracted a pretty decent field of 231 entrants after each paid INR 7,700 buy-in. The tournament generated a slightly bigger prize pool of INR 16.17 Lakhs which was well-received by the top 39 places securing a share from the same. A well-known figure in the industry Shravan Chhabria aka ‘lukBO$$13’ topped the field after the players struck a heads-up deal which saw Abhinav Iyer aka ‘abhi58’ in the runner-up position. Both players secured INR 2.71 Lakhs.

9stacks is hosting a 3-day long 9stacks Super Series INR 45 Lakhs GTD that is currently underway. And yesterday Thunder INR 6 Lakhs GTD pulled out 146 entrants after each paid INR 4,400. The final prize pool reached the top 20 places but the one to take away the largest chunk of the same was circuit grinder Sandeep Varma aka ‘effuno’ who beat Ryan Cardoso aka ‘AnAAKKonda’ in heads-up to win INR 1.56 Lakh while Cardoso earned INR 1.08 Lakh for his efforts.