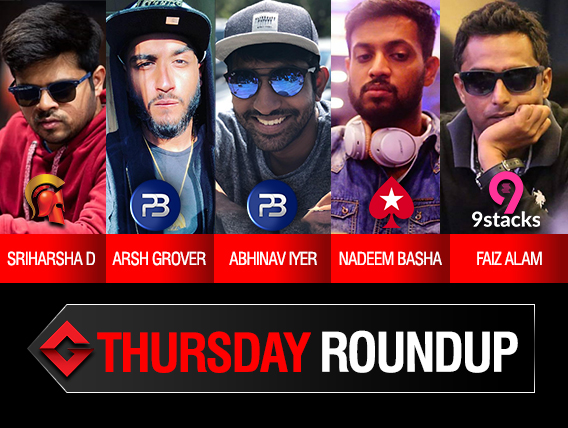 
We are already ahead of the mid-week and the guarantees have started shooting up! Yesterday on PokerBaazi marked the first day of the Baazi Poker Tour Online (BPTO) which will continue for the next three days. The players are all charged up and geared to seize the champion’s title. But the true performer was none other than Nadeem Basha who leaped to take down another flagship tournament. And here is a complete summary of Thursday majors…

Spartan Poker has been attracting the biggest crowds by always coming up with a new blend and innovative tournaments. Last night hosted Ultron INR 20 Lakhs GTD which recorded a huge field of 521 entries for a buy-in of INR 4,400, surpassing last week’s record. Generating a higher prize pool of INR 20.44 Lakhs which was later shared among the top players before the tournament came to a standstill. After becoming a Millionaire in X5 last week, Sriharsha D aka ‘Fish2050’ trounced to claim the title, adding another victory to his poker career after defeating Hitesh Batra aka ‘hitesh bhai’ in heads-up.

The tournament halted in level 53, Sriharsha holding 6h 4h was up against Batra having As 7h. Pre-flop saw the latter raising 360k and a call from the former. Both players check on flop 4c 4s 6d and Sriharsha called after his opponent’s bet of 390k on turn 8d. While Batra hit two pairs on river Ac couldn’t manage to dominate Sriharsha’s full house 44466 and that’s when the winner walked away with glory!

The four-day long online festival, the Baazi Poker Tour Online (BPTO) hosted on PokerBaazi is back with its 3rd edition from 2nd to 5th January. And yesterday at 7 pm hosted BPTO Kick Off INR 20 Lakhs GTD, luring 509 entries for a buy-in of INR 3,850 and it was the WSOP bracelet winner Abhinav Iyer aka ‘griezmann’ who railed out Sahil Mahboobani aka ‘ImHighIshove’ in heads-up to grab INR 3.88 Lakhs. However, Mahboobani settled for the runner-up position and captured INR 2.72 Lakhs.

The Thursday featured tournament Summit INR 35 Lakhs GTD on PokerBaazi was a part of BPTO giving way to 441 players as each chipped in a buy-in of INR 8,250. Riding past the field was online crusher Arsh Grover aka ‘Button_Hai_Bro’ who eliminated Ashish Munot aka ‘OMG_spew’ to secure the first-place prize money of INR 7 Lakhs while Munot managed to grab INR 4.9 Lakhs for resting in the second place.

Dominating a field of 428 entries in last night’s Godfather INR 20 Lakhs GTD on Adda52 was an anonymous player ‘bustedflop’ who defeated ‘dirtyzoso’ in heads-up to seize INR 5.3 Lakhs. The tournament saw the creation of a higher prize pool of INR 21.4 Lakhs, a slice of which was taken away by the top players.

Vaibhav Sharma aka ‘alienrobot’ (6th), Mihir Thakkar aka ‘gameofdeath’ (11th), Sumit Saurav aka ‘sumit4game’ (16th), Naren Purohit aka ‘IMUNAGI’ (26th) were among the top 43 players to receive a paycheck.

The chip graph on PokerStars’ flagship tournament Highroller INR 12 Lakhs GTD shows Nadeem Basha playing under the username ‘Downtownplaya’ adding another title after already taking down Destiny on Wednesday night. Basha maintained his position above the average stack throughout the late-night competition which observed a total number of 177 players, each one of whom paid a fixed buy-in of INR 7,700. The guarantee also surpassed to create a bigger prize pool, a share of which was taken away by the top 31 places. Basha added another feather to his already crowded poker cap after railing out Gaurav Sood aka ‘3betPanda’ in heads-up for INR 2.46 Lakhs.

9stack’s Thursday flagship event was Thunder INR 5 Lakhs GTD attracting a total number of 112 players, with each one paying a fixed buy-in of INR 4,400. However, outlasting the field and claiming INR 1.41 Lakhs in prize money was a prominent face in the circuit Faiz Alam aka ‘SentManFlying’ who eliminated Kartik Ved aka ‘TheInternetKid’ in heads-up. Eventually, the runner-up also settled for INR 97,500.

From more updates on the top online poker tournaments and winners in India, keep reading GutshotMagazine.com!