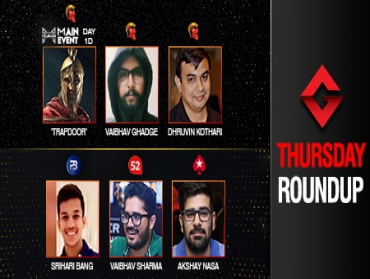 
With the weekend just two days away, there were some explosive action on the virtual felts last night. The ongoing Millionaire Main Event INR 3 Crore GTD on Spartan Poker was the major attraction running beside Ultron INR 25 Lakhs GTD. On the other hand, there was a surge of players on PokerBaazi with the commencement of PokerBaazi’s Monthly Value Series, lining up 4 tournaments with The Summit being the highest guaranteed tournament. So, let’s take quick tour of the Thursday majors…

Spartan Poker hosted fourth of the eight starting flights last night. A part of the ongoing IOPC, Event #77 The Millionaire Main Event Day 1D attracted a total of 368 players with each one chipping in the INR 11,000 buy-in. It took over 4 hours for ‘Trapdoor’ to accumulate the largest stack of 252,815 and lead 55 survivors to Day 2. The chip leader is followed by the first-ever Millionaire on Spartan, Manoj Pentakota aka ‘MRBLUE’ with 242,644 chips. He’s showing good form as it was only last week that Pentakota took down IOPC Event #40 Highroller.

Running simultaneously with the Millionaire Main Event last night was another star attraction on Spartan Poker, Ultron INR 25 Lakhs GTD. Logging in 767 entries for a buy-in of INR 4,400, enough to crush the advertised guarantee and generate INR 30.68 Lakhs in prizes. At 3:51 am, the tournament came to an end when Vaibhav Ghadge aka ‘KingJazz’ outlasted Shardul Parthasarathi aka ‘F – Bomb’ in heads-up to bag his maiden IOPC title.

Taking away the limelight on IOPC Day 14 was the Super HighRoller event displaying INR 1 Crore GTD! For a buy-in of INR 1.10 Lakhs, a total of 133 entries created the final prize pool of INR 1.33 Crore out of which to 15 players earned a min-cash. Fate was in favour of the Sunday’s Millionaire Legends first place finisher, Dhruvin Kothari aka ‘thepokerplayer’, who grabbed the largest portion of the prize pool after a heads-up deal and ‘lol this guy’ settled in the runner-up position.

The Thursday feature on PokerBaazi was PMVS Event #6 The Summit INR 15 Lakhs GTD garnering 258 players for a buy-in of INR 8,250. This led to a prize pool collection of INR 19.35 Lakhs. Capturing the lion’s portion of the same was Niraj Yadav aka ‘ooltus’ knocking out Sanat Mehrotra aka ‘mehro2511’ in heads-up for INR 4.55 Lakhs as the winner’s prize money. Mehrotra walked out with INR 3.19 Lakhs for his efforts.

Other notable players to cash include Ratul Steves aka ‘luna’ (3rd), Eka Vedantham aka ‘gettingthere’ (8th), Arjanveer Chadha aka ‘holdbaby’ (14th), Guneet Kwatra aka ‘guntz’ (24th), Aditya Kulkarni aka ‘adit11’ (26th) and others.

INR 3,300 was the buy-in for PMVS Event #7 MegaStack INR 10 Lakhs GTD pulling out a total of 281 runners. Powering through this field was Srihari Bang aka ‘bangbang999’ who triumphed the night after beating Gaurav Sood aka ‘gaug17’ in heads-up. Bang boosted his poker bankroll after adding INR 2.20 Lakh in prize money while Sood took home INR 1.55 Lakh for the runner-up position.

The top 36 players finishing in the money include Vishal Bajaj aka ‘Vishzz’ (3rd), Mahesh Shyamsundar aka ‘mahikalra’ (5th), Anuj Yadav aka ‘brockLesnar95’ (18th), Sandeep Varma aka ‘effuno’ (20th), Sagar Choudhury aka ‘sagarpupull’ (30th), Pranav Bang aka ‘pranav.bang’ (34th) and so on.

PokerStars’ flagship tournament High Roller INR 15 Lakhs GTD registered a total of 255 entries after each one paid INR 7,700. Eventually, the top 39 places walked out securing a min-cash of INR 12,207. The 2019 APT Vietnam Main Event champ Akshay Nasa playing under the username ‘youcantcallme’ railed out Vinayak Bajaj aka ‘koi.toh.rok.lo’ in heads-up to capture the title and add INR 3.03 Lakhs in prize money.