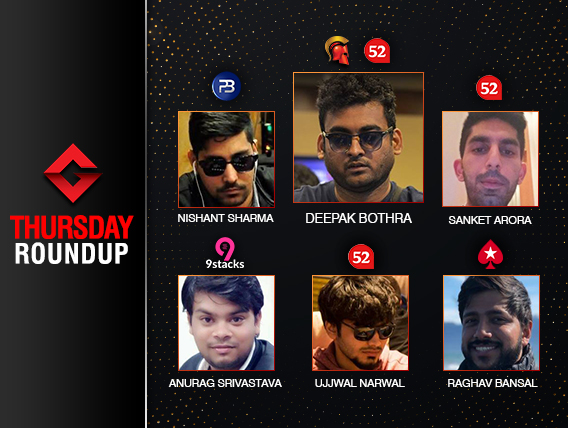 
We are just two days away from the weekend and the online felts are buzzing with higher guarantees once again. Thursday night saw some notable names in the industry boosting their bankrolls with big wins. The major attraction on Spartan Poker was Ultron INR 20 Lakhs GTD, and Adda52’s AOPS Freeze halted last night running simultaneously with the daily feature event. Other platforms too crowned their worthy winners and here is a complete summary of Thursday majors…

Spartan Poker’s Thursday flagship event Ultron INR 20 Lakhs GTD attracted 508 entries with each one paying INR 4,400. This number generated a prize pool of INR 23.20 Lakhs and it online reg Deepak Bothra aka ‘chimpoo’ who came on the top to become the latest Ultron champion after defeating ‘Netflixxed’ in heads-up.

The tournament halted in level 51 when Bothra flipped over his pair of 66 with a King kicker and eliminated his opponent ‘Netflixxed’ in the runner-up position.

One of the popular tournaments on PokerBaazi is The Summit INR 15 Lakhs GTD that saw the guarantee being smashed to become INR 19 Lakhs GTD. Overall, the event attracted a total of 254 entries with each one paying INR 8,250 buy-in. After 7+ hours of intense grinding, it was the runner-up of 2020 BPT Main Event Nishant Sharma aka ‘nishant177’ who outlasted Arsh Grover aka ‘Button_Hai_Bro’ in heads-up and boosted his bankroll by adding INR 4.48 Lakhs in prize money. Grover walked out securing INR 3.14 Lakhs for his efforts.

Adda52 hosted AOPS Freeze INR 25 Lakhs GTD, a multi-flight tournament that saw a total of 398 entries logging in. It was ‘som22asopa’ from Day 1C with a massive stack of 277,728 chips leading with the remaining survivors to battle it out on the ultimate day. Soon after the dust had settled, it was Sanket Arora aka ‘blackcod’ who knocked out ‘madhabpal2015’ in heads-up to grab the valuable title along with INR 4 Lakhs in prize money. Arora left his opponent in the runner-up position for INR 2.5 Lakhs.

A part of the ongoing AOPS was Adda52’s Thursday marquee Godfather INR 25 Lakhs GTD. 664 players entered after chipping in INR 5,500 generating a prize pool of INR 33.20 Lakhs. Out of this massive field, only 72 finishers earned a min-cash worth INR 11,620. Capturing the first-place prize money was circuit grinder Ujjwal Narwal aka ‘fourteenk’ who defeated Kaleem Pasha aka ‘fishwithnuts’ in heads-up for securing an impressive INR 7.63 Lakhs.

Other notable players to receive a paycheck include Pranay Chawla aka ‘setmeup’ (3rd), Pranjal Gandhi aka ‘lilmessipranjal’ (5th), Monish Kumar aka ‘monish1965’ (6th), Siddarth Singhvi aka ‘badtameez_donk’ (25th), Rubin Labroo aka ‘kornkif’ (45th), Arsh Grover aka ‘BigggTymeR’ (60th), the IOPC Millionaire ME champ Anurag Srivastava aka ‘NormanBates’ (63rd) and others.

Another major tournament on Adda52 last night was PLO Highroller INR 10 Lakhs GTD that fetched 135 players with each one paying INR 11,000 buy-in. After already taking down Spartan’s Ultron (read above) Deepak Bothra aka ‘bothras’ raced to add second title defeating Kartik Ved aka ‘Pegasus1505’ in heads-up and seizing INR 2.82 Lakhs in prize money.

Headlining Thursday on PokerStars was Highroller INR 15 Lakhs GTD which garnered a total of 203 players as each one paid INR 7,700. The top 34 places received a portion from the final prize pool for their efforts, but the one to take home the largest chunk was a well-known figure Raghav Bansal aka ‘OMGZ_ITS_RB’ who pocketed INR 2.94 Lakhs in prize money after eliminating Sreekanth Narayan aka ‘LaganaHiToHai’ in heads-up. Eventually, Narayan settled in the runner-up position with INR 2.16 Lakhs.

It was the latest IOPC Millionaire Main Event winner Anurag Srivastava aka ‘AnuragSrivastava’ who took down Thunder INR 5 Lakhs GTD on 9stacks. Srivastava conquered a field of 129 runners to bag another title in the same week. It was Amresh Kumar aka ‘Termi’ who couldn’t stand against Srivastava and ended in the second position. The winner boosted his bankroll by adding INR 1.41 Lakhs in prize money while his opponent managed to take home INR 97,500.