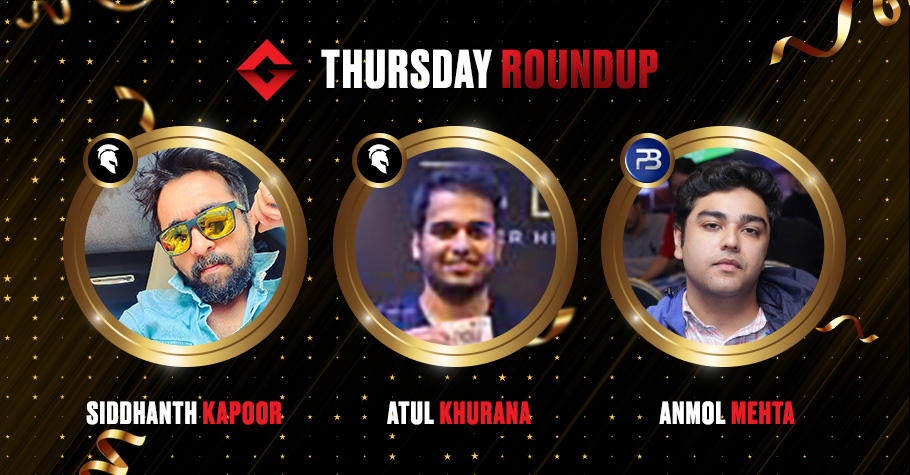 
The weekend is approaching and poker players are gearing towards grinding on heavy duty tournaments with massive guarantees on offer. Thursday was no lesser as many players battled it out with full gusto. Let’s review what happened in the tournaments hosted on Thursday and which players made it to the top.

Monster Stack on Spartan Poker was shipped by Siddhanth Kapoor aka ‘LiuKang’ who cashed ₹2,32,412. This recreational player was closely followed by poker pro Anirban Das aka ‘pokernob’ who won ₹1,47,354 in prize money.

This Monster stack tourney had 599 entries in total and the top 55 players were paid a min-cash of ₹5,870. The buy-in of this tournament was ₹2,200 and the advertised guarantee was surpassed by a slight margin number. The final prize pool stood at ₹11,98,000.

ALSO READ: Siddhanth Kapoor To Host ‘Poker For A Cause’ Tournament On PokerHigh

Spartan Poker’s Trending Thursday tournament was a ₹3,850 buy-in event. The tournament had 679 entries in total and the top 55 players were paid a min-cash of ₹11,644. Atul Khurana shipped this tournament and received a pay cheque of ₹4,61,041. The runner-up of this tournament was Ratul Steves aka ‘Atriohm’ who had a pay day of ₹2,92,309.

The advertised guarantee of this tournament was crushed and an even bigger prize pool of ₹23,76,500 was formed.

The Godfather title on Adda52 is a big deal for all poker players. Yesterday’s Godfather tournament was shipped by a mystery player ‘sadhu16’ who won ₹5,58,060 in prize money. The runner-up of this tournament was Dhawal Makani who cashed ₹4,76,100.

PokerBaazi’s The Summit tournament was won by Anmol Mehta aka ‘anzzzzz’ who shipped ₹4,74,000. This tournament had 286 entries in total and the top 36 players were paid a min-cash of ₹14,590.

The advertised guarantee of this ₹8,250 buy-in tournament was crushed and a massive prize pool of ₹21,45,000 was formed. The runner-up of this tournament was poker pro Abhinav Iyer aka ‘griezmann’ who cashed ₹3,32,000.