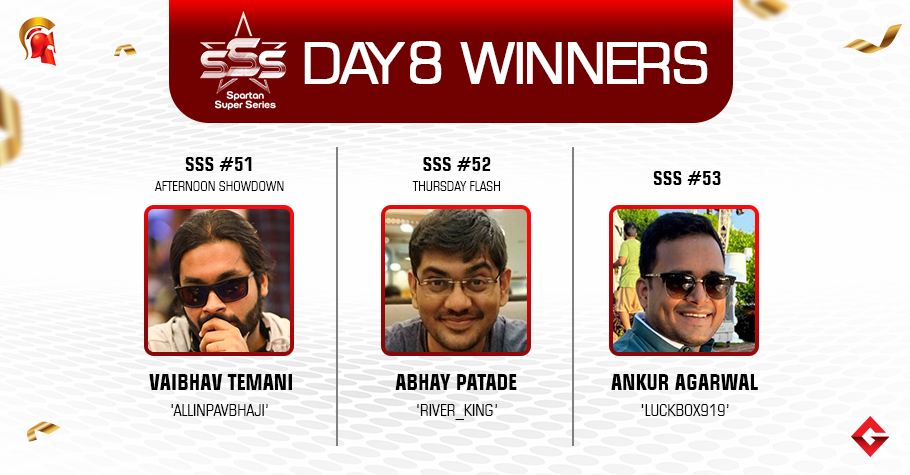 
Day 8 of Spartan Super Series (SSS) was loaded with high guarantee tournaments. Poker fanatics were looking forward to battling the Thursday feature Ultron INR 35 Lakhs GTD and of course the major attraction Super High Roller INR 65 Lakhs GTD. Unfortunately, a technical issue forced all its events to pause midway. However, Spartan Poker announced that the site will resume these tournaments today. A total of 8 tournaments were scheduled to take place yesterday out of which four ended successfully. So, keep reading to find out the big winners of SSS Day 8…

The first tournament of the day kicked off at 12 pm eventually drawing a total field of 421 entries. Individuals paid INR 550 which led to the creation of INR 2.10 Lakhs in prize pool. The top 31 finishers locked INR 1,852 as min-cash and the one to take home the largest chunk was ‘prasun2329’ who came out as the official winner after the players settled for a three-way deal which saw his opponent ‘animeshth’ in the second position and ‘pokz’ in the third place.

Circuit reg Vaibhav Temani aka ‘AllinPavBhaji’ triumphed the Afternoon Showdown on Spartan Poker yesterday. The tournament attracted a total of 380 entries after each one paid INR 2,200. The top 31 finishers returned home earning a min-cash of INR 7,040. Temani outlasted ‘royalking111’ in level 47 of the tournament and bagged the winner’s title along with the first-place prize money.

A total of 436 runners logged in to the third tournament of the day after paying INR 1,100. The final prize pool was shared among the top 39 places who strolled out with at least INR 4,140 as min-cash. Capturing the winner’s title was Abhay Patade aka ‘river_king’ after the players struck a three-way deal and Patade with his larger stack of 1.24L claimed the top prize!

Once again paying INR 1,100 the fourth tournament of the day attracted 329 hopefuls. Out of this number, the top 27 places secured a paycheck while taking home the SSS title along with the first-place prize money was Ankur Agarwal aka ‘luckbox919’ while his opponents ‘MR.BEAST’ settled in the second place and Vivek Singh aka ‘KasolHieghts’ in the third position.