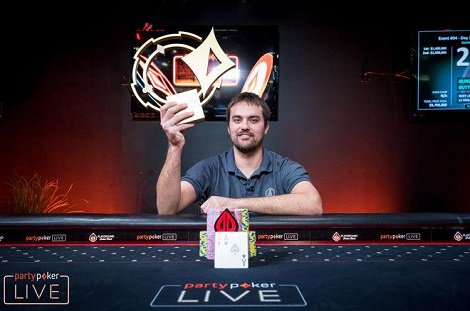 
The partypoker LIVE MILLIONS Season 2 kicked off with a stop at the Playground Poker Club in Kahnawake, Canada. The tournament series kicked off on 21st April and it has recently concluded, with the final couple of events crowning its winners on 2nd May 2018.

The tournament series promised over CAD 15 million in guaranteed prizes and three millionaires to be crowned in this series. The partypoker LIVE MILLIONS North America ME was one tournament that was still in play on the final day, and the champion was eventually crowned – Taylor Black from USA.

The CAD 5,300 buy-in Main Event began on 24th April and after several days of grinding, the winner was crowned. California’s Taylor Black beat countryman Darryll Fish in heads up, who, along with 3rd placed Anthony Ruberto, also walked away from this event as millionaires.

This would’ve been one of the best moments of Black’s poker career so far, registering his career best live poker cash and nearly doubling his career earnings, taking it past the $2 million mark. Prior to this, his best win was $545,430 that he earned for finishing second in a 2017 WSOP event.

Another event that ended yesterday was the CAD 1,100 Turbo Event, that was dominated by local Canadian players. Ultimately, it was David Shao who was crowned champion and was awarded the top prize of CAD 180,000 ($140,384). He beat WSOP bracelet winner Shaun Deeb and one of Canada’s best pros Griffin Benger on the final table.

Keep reading GutshotMagazine.com for similar updates on poker tournaments from around the globe!