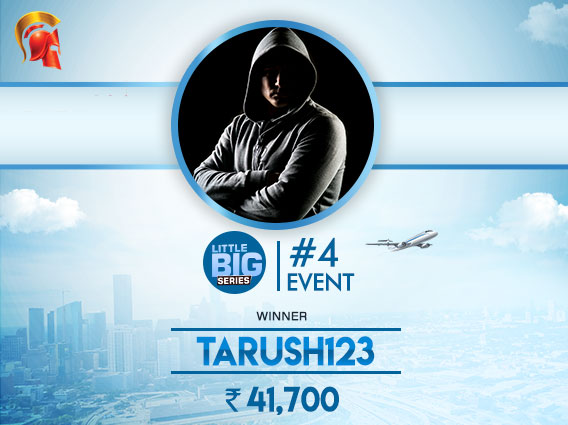 
The Little Big Series (LBS) happens to be one of The Spartan Poker’s most popular online poker offerings, a series which is held every month on their platform. The main purpose of this series is to allow players to buy-in small and win big, especially those players who don’t have the bankroll to play the high-value tournaments online.

Yesterday, 15th November, marked the start of yet another edition of the LBS on Spartan, with a prize pool of INR 29+ lakh on offer, in 18 tournaments spread across 4 days. Day 1 saw 4 tournaments being played, where ‘Tarush123’ was the biggest winner, shipping LBS Event #4 at the end of the night.

Here’s a small summary of these four tournaments:

The series kicked off with an INR 60k guarantee event that saw a total of 267 entries taking part, including re-entries. From these, the top 36 were paid out a minimum cash prize of INR 390, but none received a bigger pay-check than Bhanu Prakash aka ‘spectre’. He shipped the tournament and took home the top prize of INR 12,000, beating ‘PokerKnight’ in heads-up, who settled for INR 8,400 for finishing second. Prakash held Ts 9h in the final hand and the Td Th Ks Ad 9d board saw him improving to a full house to win the tournament.

The second tournament of the day saw a slightly bigger prize pool on offer, and here, another strong field of 250 entries had registered, with the prize pool being shared among the top 36 places with a min-cash of INR 585. The tournament came to an end in Level #44 with the blinds at 9,000/18,000 – 1,800, when ‘POKERMMA’ got past ‘yUDdam’ in heads-up, taking home first and second-place prizes of INR 18,000 and INR 12,000 respectively. In the final hand, POKERMMA completed a set of Tens to beat his opponent’s pair of Aces and win the tournament.

The final tournament was the biggest of the night and here, the prize pool was beaten thanks to 250 entries joining the tournament. From them, only 36 could be paid out a minimum cash prize of INR 1,355. To end the day and take away the biggest prize on LBS Day 1, ‘Tarush123’ beat every other opponent and won INR 41,700 for his effort. In heads-up, he beat ‘POKERMMA’ who also won LBS Event #2, which helped him gain vital Leaderboard points. Here, he was rewarded with INR 29,190 for finishing second.

For more updates on the ongoing Little Big Series on The Spartan Poker, keep reading GutshotMagazine.com.