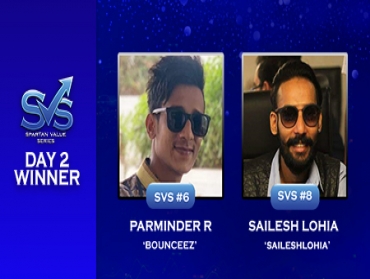 
Its been a power-packed week on Spartan Poker recording a surge of players and a dearth of events. Yesterday saw another round of Spartan Value Series (SVS) and this March edition’s tournament promises INR 66+ Lakhs GTD especially designed for the low and mid-stakes players. And here is a complete summary of SVS Day 2…

Yesterday was PLO special and the first tournament attracted a pretty good field of 500 entries for a buy-in as low as INR 110. The advertised guarantee was smashed to become INR 50k and the top 31 finishers locked at least INR 440 min-cash. Coming out on top was online grinder Parminder Randhava aka ‘Bounceez’ after the players settled for a two-way deal that saw ‘akshay9144’ in the runner-up position.

The second tournament of the day had a fixed buy-in of INR 330 which eventually fetched 236 entries enough to smash the assured amount and create INR 70,800 in prize pool. The top 17 places earned a share from the same for their efforts however, the one to take home the largest chunk was ‘asa’ after the players settled for a heads-up deal which saw ‘BlackMamba’ in the second position.

At 5 pm the third tournament of the day took place. The entire event pulled out a total of 272 hopefuls hunting for the first-place prize money. The advertised guarantee was surpassed, and the top 17 players were assured at least INR 640. The tournament ended in level 30 when the players decided to settle for a heads-up deal. And Sailesh Lohia aka ‘saileshlohia’ carrying the largest stack of 1.08 million was announced as the official winner while ‘hpmaya’ earned the second-place payout.

SVS Day 2 ended with Event #9 that kicked off at 7 pm. A total of 144 runners entered the field after paying a fixed buy-in of INR 770 out of which the top 15 places earned INR 2,520 as min-cash. Online grinder ‘ingloriousbasterds’ defeated ‘Samaybk’ in heads-up with his flush over his opponent’s two pairs of Aces and Fives.