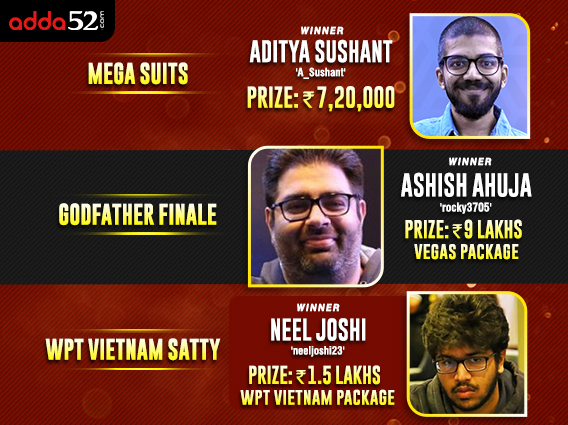 
Adda52 is undoubtedly one of the companies to have been in the top of the online poker scenario in India since a long time. Holding and maintaining that position, they have gone on to host some of the most popular tournaments and series for every poker aficionado’s pleasure. Yesterday too, the platform hosted three such big tournaments, which are as follows:

The tournament began at 5 pm early evening and gathered a field of 298 unique players to the felt. It Iasted a little over 9 hours, ending at 2.06 am today morning and paying out top 55 players for a minimum cash of INR 13,500.

Sushant has been playing poker since a long time now and is a well-respected entity in the community. He was the first Indian to bag a WSOP bracelet back in 2017. Among his recent achievements, he became the 5th entrant into Destiny 8.0 SnG Finale on Spartan last month. He has won almost all titles from all leading platforms like Spartan, PokerBaazi and Adda52 as well.

Coming to his live record, he finished in the money in the 2019 Aussie Millions Main Event recently. He even won the Weekly Wednesday after taking a detour in Australia in The Star Casino, Sydney. He earned his best cash of $75k for winning 2017 WSOP NLH Tag Team Event where he earned the bracelet too. Now, yesterday’s Mega Suits win is a significant amount and he’ll be looking to use it to further his impressive record and add a few more feathers to his cap.

Adda52 Godfather is an ever-popular tournament series where players get the chance to fly overseas to try their hand at international live events and get some exposure, which is so needed for young players from the country. Last night, Godfather 7.0 SnG Finale was held where 9 Godfather winners contested for one INR 9 Lakhs Las Vegas Package.

The player to ship the above package was known online grinder Ashish Ahuja aka ‘rocky3705’. The 9 Godfather SnG finalists who played yesterday were:

Ahuja is a renowned entity of the community and his record is an impressive one. Last month, he won the Big Ten, a fresh Spartan tournament. He even won Spartan 2.o.K last December. He has won titles like Triple Bubble, PokerBaazi BSS SuperStack, and much more in 2018. The package win yesterday has earned him a coveted Las Vegas trip and he’ll be hoping to make headlines at the 2019 WSOP, which is special this time since it will be hosted for the 50th time.

Since a major series is coming up in about 14 days, the World Poker Tour (WPT) Vietnam, Adda52 hosted a WPT Vietnam Satty yesterday at 8 pm. The buy-in for the Satty was fixed at INR 5,500 and Neel Joshi aka ‘neeljoshi23’ emerged on top of the field and bagged the INR 1.5 Lakhs WPT Vietnam package.

Joshi is a well-known circuit player and has a lot of cashes in previous online tournaments. The player was also a Godfather finalist before but didn’t convert into the package that time. Now, with this win, he’ll be looking to make deep runs in various 2019 WPT Vietnam tournaments, which is scheduled between 14-24 March with VND 8 billion (~INR 2.43 Crores) in series guarantee.

Keep reading GutshotMagazine.com for more such tournament updates, results and general poker news from all over the world.