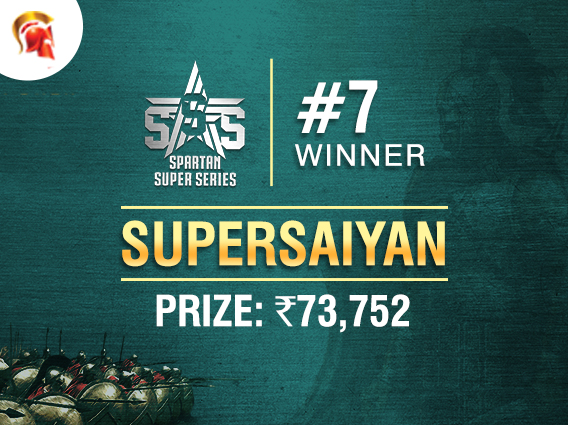 
The opening event of the Day 2 at the Spartan Super Series kicked off the day’s action quite nicely and ‘NaitikJennRj14’ was one happy player after taking down Event #6 of the week-long series which is currently taking place at The Spartan Poker. The late afternoon tournament also drew in plenty of players and outlasting those good sized numbers was ‘supersaiyan’ who made his way to a title win in this tournament.

This 4:00 pm tournament followed a Re-entry format where players had to pony up a buy-in of INR 880 and were competing for the guaranteed prizepool of INR 3 Lakhs. The final field of 217 entries took the prizepool to INR 3,51,200 so plenty of bucks to play for if one were to finish in the money. 30 players would make that cut assuring themselves a minimum payday of INR 2,634 in this Event #7 of the SSS. ‘David Blaine’ (15th), ‘pokernoob’ (12th) and ‘Romoid’ (10th) were some of the familiar players who ran deep but ultimately fell short of the final table.

The juice, as they say, in tournaments is in the top 3 spots and ‘Riverhunter’ was the first from the final three to get eliminated, his elimination coming at the hands of ‘mmonas’. Holding a pretty good hand in Ks Jc, Riverhunter decides to make the call against mmonas’s Qh 3c. Unfortunately the flop Qd 4c 4d As 5h is not a good one for the shortstack and he is out of the tournament for a 3rd place prize of INR 35,120. It was time for heads-up with both players holding near even stacks and mmonas only slightly ahead with his 1.8 million stack as compared to the 1.6 million of his opponent.

It was not a very protracted battle, about 25 hands or so but half there there was one massive pot which gave a big lead to supersaiyan. mmonas with 6d Jd decided to bump it up to 120,000 (blinds were 40,000-80,000 ante 10,000). For a heads-up hand, supersaiyan’s Ah 6h was quite strong and he accordingly re-raised to 315,000 which was flatted. Both players hit bottom pair on a flop of Kh 4d 6s and supersaiyan suitably bet out 405,000 and then found himself facing a power all-in of 1.6 million by mmonas. This was supersaiyan’s tournament life and he decided he was good and called. The turn and river (9c, 8c) didn’t improve things for mmonas and that close to 3 million chip pot and the lead went supersaiyan’s way.

There were a few more pots where mmonas tried to claw his way back but supersaiyan still held the lead when the final hand happened which pitted the former’s Ace Queen against the latter’s Ace King. Both players hit a pair on the 6h 4c 5h 4s 9c board but supersaiyan’s King kicker prevailed to give him the title and first prize of INR 73,752 while mmonas got INR 51,626 for his runner-up finish.

Two events down and three more to go for Day 2 action including the highlight Mega Stack tournament of the day so stay tuned to GutshotMagazine.com for those round-ups.