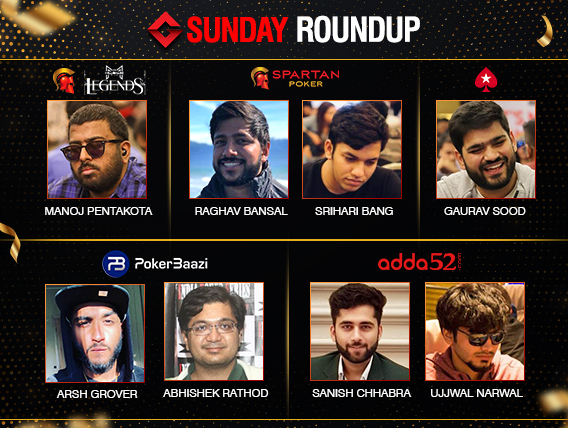 
On one hand, the live felts were busy hosting Deltin Poker Tournament (DPT) and on the other, the online circuit was thundering with tons of events! March on Spartan Poker commenced with Millionaire Legends followed by double feature tournaments. PPL is also underway on PokerBaazi, other attractions were Adda52’s Big Slick and Mega Suits and PokerStars’ Sunday Special. And here is a complete summary of Sunday night…

The new month kicked off with Millionaire Legends INR 1.5 Crore GTD on Spartan Poker attracting a pretty good field which eventually saw the advertised guarantee smash to become INR 1.63 Crore which was eventually profited by the top 100 finishers. Day 2 of the Millionaire Legends halted at 2:13 am and it was Spartan’s first-ever Millionaire, Manoj Pentakota aka ‘MRBLUE’ to take away the limelight after eliminating Mayank Jaggi aka ‘TheBoogeyMan’ in heads-up who secured the second place payout.

Spartan Poker’s Sunday feature Sunday SuperStack INR 35 Lakhs GTD pulled out 763 runners after each one chipped in INR 5,500. This number was enough to create a bigger prize pool of INR 38.15 Lakhs. After the dust had settled it was a well-known player in the country Raghav Bansal aka ‘thatssosick’ to triumph the tournament knocking out Arsh Grover aka ‘BigggTymeR’ in heads-up.

Spartan Poker’s second feature tournament began at 9:30 pm registering 436 entries out of which only the top 39 finished in the money. And the one to take home the biggest share of the prize pool was one again, Srihari Bang who railed out ‘ikigai’ in heads-up play to add yet another title to his poker CV.

The Endeavour (Flight 1A and 1B)

PokerBaazi Premier League (PPL) is underway on PokerBaazi guaranteeing INR 7.3 Crore GTD and The Endeavour INR 50 Lakhs GTD wrapped up two starting flights. Flight 1A pulled out 545 entrants after paying 5,500, individually. After 6+ hours of grinding it was Gaurav Sood aka ‘gaug17’ to bag the maximum chips of 402,443 chips.

PPL Event #18 The Endeavour Flight 1B kickstarted at 9 pm pulling out 459 entrants, after hours of battle it was Arjanveer Chadha aka ‘holdbaby’ to possess the largest stack of 503,564 becoming the overall chip leader. Chadha is followed by Laksh Pal Singh aka ‘boomtilt23’ with 457,490 chips and ‘sokopa’ in the third place with 399,711 chips, rounding up the top three.

Sunday feature on PokerBaazi,  the popular BSS SuperStack INR 30 Lakhs was a part of PPL. A total of 619 runners entered the tournament, generating a prize pool of INR 30.95 Lakhs. Coming out on top was Arsh Grover aka ‘Button_Hai_Bro’ who locked INR 5.84 Lakhs in prize money defeating ‘flopCheck’ in heads-up who settled for INR 4.10 Lakhs in the runner-up position.

PPL Event #16 MegaStack INR 7 Lakhs commenced at 7 pm yesterday fetching 330 entries after each paid INR 2,750 buy-in. The top 36 places received a paycheck from the final prize pool. It was circuit grinder Abhishek Rathod aka ‘AbhishekRathod’ to clinch the winner’s prize money of INR 1.82 Lakhs defeating ‘roothless’ in heads-up who took away INR 1.27 Lakhs for settling in the second position.

Sunday on Adda52 is reserved for two feature tournaments and one of them is Big Slick AF assuring INR 15 Lakhs GTD which kicked off at 4 pm yesterday. After 8+ hours of intense grinding eventually saw Sanish Chhabra aka ‘sanish21’ who added INR 2.42 Lakhs in prize money. Chhabra defeated ‘gutshotguru1’ who earned the second-place payout of INR 2.37 Lakhs.

Sunday on PokerStars are all about Sunday Special INR 15 Lakhs GTD which kicked off at 5 pm sharp pulling out 305 entrants. Each one chipped in INR 5,500 buy-in to enter the competition and eventually after long intense hours of grinding, the players settled for a heads-up deal it was Gaurav Sood aka ‘3betPanda’ who came out on top and Sahil Mahboobani aka ‘inaboobham’ rested in the second place both pocketing INR 1.24 Lakhs in prize money.