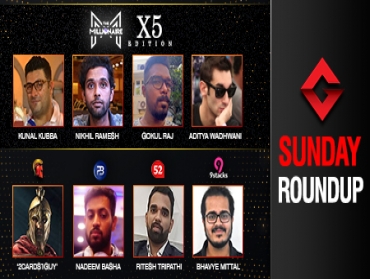 
What an incredible night it was for the poker fanatics out there, eagerly waiting for the biggest guaranteed tournaments. The online felts are laying down marvelous events keeping in mind their loyal users. Spartan Poker concluded January edition’s Millionaire X5 promising 15 Lakhs to the top 5 places. PokerStars, on the other hand, wrapped up its 7-day long Winter Series. So, let’s take a quick look at Sunday headliners…

Event #19 of the IOPC was truly the headlining tournament on Spartan Poker last night crowning the top 5 players of the Millionaire X5. Scheduled between 24 to 26 January, the multi-flight tournament registered a total of 1,882 players for a buy-in of INR 8,800, crushing the advertised guarantee to create a bigger prize pool of INR 1.50 Crore.

Day 2 commenced with Day 1A chip in-charge Rajat Sharma aka ‘Garammasala’ building a towering stack of 390,274. It was at 2:20 am, after long hours into battling and eliminations the tournament concluded with Kunal Kubba aka ‘kunal’ (1st), Day 1 C chip leader and the 2018 IOPC Millionaire Nikhil Ramesh aka ‘crazy_coyote’ (2nd), ‘iceiceice’ (3rd), Gokul Raj aka ‘Super Kings’ (4th) and Aditya Wadhwani aka ‘adiwankenobi’ (5th) ultimately boosting their poker bankrolls in the three-day-long tournament with INR 15 Lakhs as winner’s prize and grabbing the Millionaire title!

A part of the thrilling India Online Poker Championship (IOPC), Sunday SuperStack INR 40 Lakhs GTD commenced yesterday at 8 pm. Recording a massive field of 1,013 entries for a buy-in of INR 5,500 and smashing the guarantee to generate a huge prize pool of INR 50.65 Lakhs, the top 95 finishers walked out with their min-cash. After 10+ hours of intense grinding and settling the dust, it was ‘2cards1guy’ who was announce the official winner after the players settled for a heads-up deal. He pushed away online reg Gaurav Sood aka ‘mozzie17’ to the runner-up position.

INR 5,500 was the buy-in to Sunday feature tournament on PokerBaazi, BSS SuperStack INR 25 Lakhs GTD. And the star of the night was a prominent figure in the poker industry Nadeem Basha who took down the event adding INR 4.85 Lakhs as the winner’s prize money. Playing under the username ‘SpadeHunter’, Basha railed out Gaurav Sood aka ‘gaug17’ who probably had a marvelous Sunday after already finishing second in Spartan Sunday SuperStack (read above). Sood earned a handsome INR 3.40 Lakhs.

Besides, the Sunday feature, PokerBaazi’s other lower guaranteed tournament saw Anuj Yadav aka ‘brockLesnar95’ outlasting a field of 243 to triumph The Monster INR 5 Lakhs GTD for INR 1.42 Lakhs. Yadav defeated Anurag Srivastava aka ‘13anurag’ in heads-up to bag INR 1 Lakh as the runner-up prize money.

The Grinder Event #33 Main Event INR 5 Lakhs GTD on PokerBaazi announced Srihari Bang aka ‘bangbang99’, the ultimate titleholder earning INR 1.3 Lakhs. The entire tournament registered a total of 623 entries for a buy-in of INR 1,100 which saw the guarantee smash to become INR 7.23 Lakhs in the prize pool. Bang eliminated ‘antypanty93’ in heads-up who settled for INR 91,748.

Sunday is reserved for two major tournaments on Adda52 and one of them was Big Slick AF INR 15 Lakhs GTD. Dominating a field of 683 entries in the 8+ hour grinding was Aniket Pradhan aka ‘Sandystrom’ who captured INR 2.76 Lakhs in prize money. Pradhan defeated ‘Ivey2’ in heads-up who settled in the second place for INR 2 Lakhs.

The highest guaranteed tournament on Adda52 last night was Mega Suit AF INR 30 Lakhs GTD attracting a total of 599 entries after paying a fixed buy-in of INR 5,500. After few hours, the top 63 finishers strolled out with their hard-earned min-cash but the one to take away lion’s share of the prize pool was Ritesh Tripathi aka ‘ritesh5812’ pocketing INR 7 Lakhs sending ‘thegrinder’ into the runner-up position to bag INR 4.11 Lakhs.

Recently awarded the all-rounder crusher of the year 2019 in IPC Awards 2020, Bhavye Mittal triumphed Thalaiva INR 20 Lakhs GTD on 9stacks after 7+ hours of grinding. Mittal aka ‘noobpro’ rode past a field of 641 entries to seize the winner’s prize money of INR 4.20 Lakhs.

The top 80 finishers earned quite well from the prize pool and walked out with a min-cash of INR 6,000. The champion, Mittal pushed away his opponent ‘deps111’ in heads-up to the runner-up position for INR 2.80 Lakhs. For the latest updates on live and online poker tournaments keep reading GutshotMagazine.com and stay tuned!