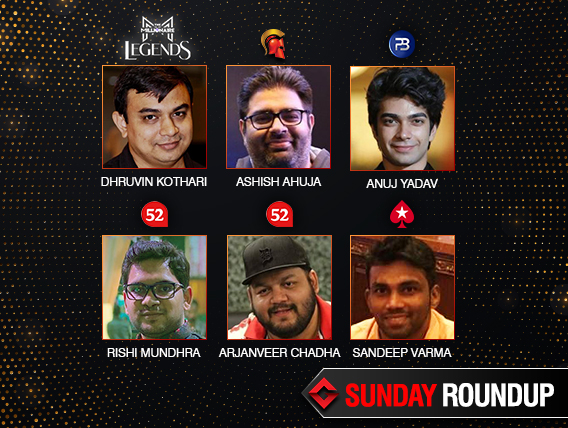 
Sunday is a workday off for the citizens of the country, the tournaments see a surge in turnout and hence big guarantees are kept and huge cash prizes are awarded every week on Sunday. Apart from the daily features, the events that took away the limelight were Spartan Poker’s IOPC Millionaire Legends INR 2 Crore GTD and Adda52 Millions AF! And here is a complete summary of Sunday majors…

The biggest buy-in tournament on Spartan Poker was the January version’s IOPC Millionaire Legends INR 27,500. The multi-flight three-day tournament fetched a total of 980 runners generating a huge prize pool of INR 2.45 Crore and 145 players finished in the money. Day 2 began was led by the overall chip in-charge from Day 1A Abhineet Jain aka ‘bankelal13’ building a towering stack of 615k chips.

It took over 6 hours to announce the official millionaire of the month. The event concluded with a 5-way deal and the chip leader from Day 1B Dhruvin Kothari aka ‘thepokerplayer’ proved himself once again, carrying the largest stack at the time of the deal. Also, a part of the same were Abhineet Jain aka ‘bankelal13’, Arsh Grover aka ‘BigggTymeR’, Nikita Luther aka ‘Pterodactyl’ and Anant Purohit aka ‘Pro’ settled in the second, third, fourth and fifth position, respectively according to their chip stack.

The recent BPT Kick Off Event winner Ashish Ahuja has been under the limelight this month and yesterday night he raced to triumph the Sunday special on Spartan Poker’s Sunday SuperStack INR 40 Lakhs GTD. Another major attraction on the felts drawing 950 players in total crushing the guarantee to create a prize pool of INR 47.50 Lakhs and the top 87 finishers ended in the money. Ahuja who is popularly known as ‘Spewushhhiiiii’ railed out ‘BuddyLove’ in the second position to seize 6-figures!

Beating a field of 254 entries in The Monster hosted on PokerBaazi was Anuj Yadav aka ‘brockLesnar95’. The buy-in to the tournament was INR 2,750 which resulted in the creation of a higher prize pool of INR 6.35 Lakhs from which the top 27 places were paid out. Yadav grabbed the winner’s prize money of 1.49 Lakh after beating Ayush Garg aka ‘Proman502’ in heads-up. The runner-up walked away with INR 1.04 Lakh.

INR 5,500 was the buy-in enrolling 554 entrants in the Mega Suits AF INR 30 Lakhs GTD on Adda52. Topping the list and claiming the day was online reg Rishi Mundhra aka ‘ronaldo94’ after the players struck a two-day deal and that’s when Honey Bijlani aka ‘ho9ey’ walked out earning INR 5.37 Lakhs while INR 6 Lakhs belonged to the winner!

A major tournament on Adda52 last night was Millions AF INR 20 Lakhs GTD charming 236 entries for INR 11,000 which led to the creation of a bigger prize pool of INR 23.60 Lakhs and the top 24 places were paid out a min-cash. Online grinder and circuit reg Arjanveer Chadha aka ‘arjan30’ grabbed the Millions title earning INR 5.22 Lakhs in prize money after sending out Anuj Yadav aka ‘anuj25395’ to the runner-up position who earned INR 5 Lakhs.

The advertised guarantee was surpassed and saw INR 16.40 prize pool from which the top 55 places profited including Rajat Sharma aka ‘sharabikebabi’ (5th), Sahil Mahboobani aka ‘inaboobham’ (12th), Gaurav Sood aka ‘3betPanda’ (18th), Ashish Ahuja aka ‘Spewushhhiiiii’ (25th), Neeraj Kumar aka ‘SelfClaimedPro’ (40th), Arjanveer Chadha aka ‘ballistik310’ (46th) and so on. For latest updates on live and online poker tournaments keep reading GutshotMagazine.com and stay tuned!