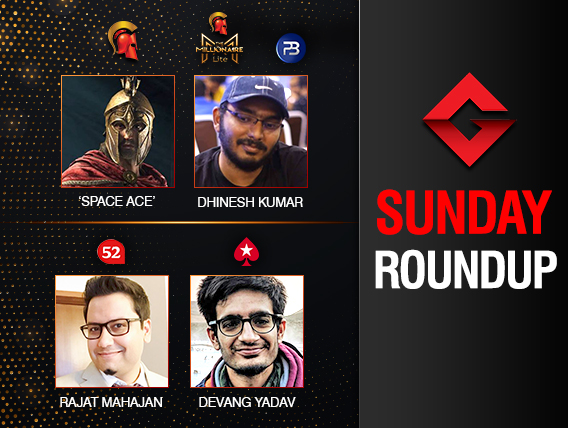 
Third week into the new year and the celebration continues. The poker fanatics eagerly wait for Sunday flagship tournaments that assures huge bundles of prize money. And by now, the active players also know that Spartan Value Series (SVS) on Spartan Poker was underway and yesterday hosted Day 2 of The Millionaire Lite which guaranteed 10 Lakh to the first place! So, let’s take a quick look at Sunday majors…

Taking away the limelight on Spartan Poker last night was The Millionaire Lite. The virtual felts were blazing with fire, just as the Millionaire inked to the calendars, scheduled between 10 to 12 January, luring a total number of 2,255 entries as each one paid a buy-in of INR 1,650. The top 195 players profited from the newly generated prize pool while the one to take away the lion’s share was a well-known circuit grinder Dhinesh Kumar aka ‘kendralust’ who pounced through the field to grab the ultimate title after defeating ‘GHOSTF@CE’ in heads-up.

In Level 33, Kumar held pocket Eights up against ‘GHOSTF@CE’ who had pocket Fours. Pre-flop saw the entire stacks of both players in the middle and each obtained pair of Tens when the board ran Td 9d Th 2s Qd. And that’s when Kumar flipped his higher two pair railing out his opponent to the runner-up position.

Gutshot caught up with the winner who expressed, “I am obliged to Abhishek Rathod for giving me the opportunity to be a part of IPP and very big thanks to Danish for making me a better player in the course of 1 year. I am overwhelmed by this victory!”

Another flagship tournament on Spartan Poker last night was Sunday SuperStack INR 35 Lakhs GTD which attracted 616 players and each one enrolled for a buy-in of INR 5,500. The guarantee was met, and the top 63 places raced out of the event with an assured min-cash. However, the one to seize the biggest cash prize anonymous yet an online cursher ‘space ace’ who rode past the massive field and eliminated ‘Tonkaaa’ in heads-up.

Fate was in favour of the Millionaire Lite winner who went around shipping another tournament on PokerBaazi hosting The Monster INR 5 Lakhs GTD at 5 pm sharp. The event observed 170 buy-ins and the top 21 places strolled out with their min-cash. Once again, Dhinesh Kumar aka ‘dhineshrocky007’ took down the tournament after defeating ‘dilbaghsingh’ in heads-up securing the first-place prize money of INR 1.24 Lakh and the runner-up managed to take home INR 87,150.

The second major tournament on PokerBaazi last night was BSS SuperStack INR 25 Lakhs GTD. The competition continued for over 8 hours attracting 418 players for a buy-in of INR 5,500. Eventually, the prize pool was shared among the top 54 places and the one to take home the biggest slice was Chirag Bhardwaj aka ‘Olandir’ who defeated ‘mowgumotu’ in heads-up to obtain INR 5 Lakhs in prize money.

Sunday on Adda52 saw 512 players registering in Mega Suits INR 25 Lakhs GTD for a buy-in of INR 5,500. The guarantee was passed creating a slightly bigger prize pool and a share from the same was given out to the top finishers. Powering through this field was online grinder Rajat Mahajan aka ‘Happyfish’ who secured the first-place prize money after pushing out ‘Lemonde’ to the runner-up position for INR 4.2 Lakhs.

Abhineet Jain aka ‘pokemon13’ (4th), Sanat Mehrotra aka ‘mehro2511’ (6th), Goonjan Mall aka ‘gmtesting’ (20th), Sumit Sapra aka ‘Hammer_Head’ (21st), Sagar Choudhury aka ‘alwaysnutz’ (49th) and others were among the few notable players to receive a paycheck.

Sunday on PokerStars are all about Sunday Special INR 5 Lakhs GTD which kicks off at 8 pm sharp. Each player chipped in INR 1,750 buy-in to enter the competition and eventually after long intense hours of grinding, the star of the night was Devang Yadav aka ‘trappyfish’ pocketing INR 90,899. The tournament halted after the players settled for a heads-up deal and Yadav pushed out ‘J44TR4M’ in the runner-up position for INR 76,868.

Other notable players to receive a share from the prize pool include Shravan Chhabria aka ‘lukBo$$13’ (10th), Srihari Bang aka ‘bangbang1999’ (15th), Abhishek Garg aka ‘TheGrinder333’ (34th) and so on. For latest updates on live and online poker tournaments keep reading GutshotMagazine.com and stay tuned!