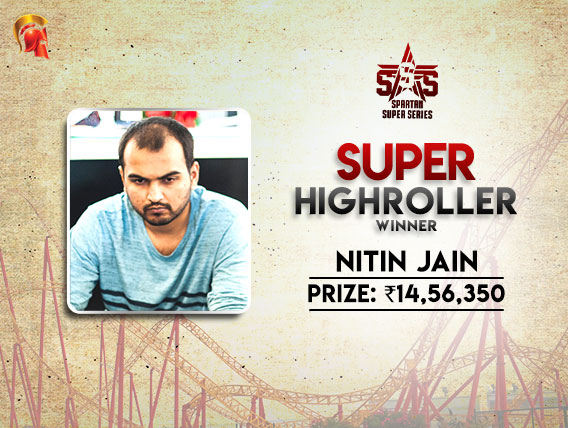 
The Spartan Super Series is an online tournament series held every once in a while, by The Spartan Poker, one of India’s top poker companies. This month’s series was scheduled between 11-17 June and after four days of the series, quite a few winners have been crowned and most of the guarantees have been crushed.

Apart from over INR 4 crore in guaranteed prizes during the series, Spartan is offering INR 15 lakh as prizes for the SSS Leaderboard, for the most consistent performers. Yesterday was Day 4 of the series and after three days of holding the top spot on the leaderboard, ‘invinciblewolf’ has finally lost his position to Abhinav Iyer aka ‘Schumi91’, who won the Destiny tournament on Day 3. Nitin Jain was the big winner of the day, winning over INR 14 lakh by shipping the SHR.

Here’s a look at what happened on Day 4 of the SSS:

This INR 550 buy-in tournament had the smallest guarantee of the SSS so far, but it still saw an amazing participation of 480 entries, which created a higher prize pool of INR 2.4 lakh. 31 entries were paid out a minimum cash prize of INR 2,112 and it was Varun Gupta aka ‘iwillbluff’ who took home the first prize of INR 50,760. You will know Gupta from last month’s Moneymaker 5.0 on PokerBaazi, as he shipped that popular tournament for the massive top prize of INR 30 lakh.

This afternoon event saw a participation of 334 entries and it didn’t take too long to wrap up, eventually finishing in Level #35, with the blinds running 10,000/20,000 – 2,000. It was ‘Lokimon’ who won the heads-up battle against ‘instrumental’ (also runner up in SSS #16), who missed out on another SSS title.

In the final hand, Lokimon called his opponent’s all-in bet after the turn, holding 5-7 as compared to instrumental’s 4-6. The flop opened 8-4-6, which allowed the former to complete a straight on the flop itself, while his opponent couldn’t get better than a two-pair, with the turn and river opening 5 and 9. Lokimon took home INR 78,750 for first place.

This was an INR 1,100 Freezeout tournament which attracted a total of 217 entries. Eventually, 31 players were paid out a minimum cash of INR 2,200 and ’99ayka99′ shipped the event, beating ‘d00mtr00p3r’ in heads up and taking home a pay-check of INR 52,875. In what became the final hand of the tournament, his full house turned out to be better than his opponent’s three of a kind fours.

Here’s one of The Spartan Poker’s featured events, which sees a high participation every Thursday and this week was no different, as the INR 5,500 buy-in tournament got 340 registered entries and the new prize pool generated was INR 17 lakh. 27 players finished in the money, with a minimum pay-out of INR 17,000, and ‘Steel’ took home the biggest prize of all.

The player beat ‘nailedit’ in heads-up for a payday of INR 3,76,550, while the runner up won a handsome prize of INR 2,54,150 as well. The final hand saw both players going all-in post-flop and both getting two pairs, but the winner’s Jacks and Eights was superior to his opponent’s Eights and Sevens.

There was excitement for SSS #19, but this tournament was the one that would make one person much richer and a lot of points would also be achieved towards the SSS Leaderboard. A massive buy-in of INR 55,000 meant that only the best poker pros would take part in this tournament, which was ultimately shipped by Nitin Jain aka ‘ReDut’, who took home a massive prize of INR 14,56,350 for first place.

Losing to Jain in heads up was Abhinav Iyer, playing under the name ‘Schumi91’, and he also secured a prize of over INR 10 lakh, as the tournament registered 114 entries, taking the prize pool up to a massive INR 57 lakh. Iyer went from #3 straight to the top of the SSS Leaderboard, where INR 15 lakhs are up for grabs.

Gutshot had a word with both the winner and the runners up of this cash-rich tournament. When asked about the experience of winning such a big tournament, Jain said, “Pretty amazing. I always look forward to SHR’s as the structure suits me. Primarily, I am a cash game player and the stack depth gives me an edge over the field. It was a smooth ride to the top for me, as I was pretty much chip-leading through the final table.”

He didn’t miss the chance to congratulate the runners up as well. “Kudos to runner up Abhinav Iyer. He played hard and really good,” said Jain. We also asked him about his future plans as a poker player and his answer was pretty simple and straightforward – “Keep grinding cash!”

After that breath-taking SHR tournament, players took part in a smaller, INR 990 buy-in tournament, which saw 627 entries as the night tournaments usually see the most participation. ’tilting turtle’ was the eventual champion in the tournament where 47 players were paid out a minimum cash prize of INR 3,217.

The player took home INR 1,09,982, after having beaten ‘Irsholz’ in heads up. In what became the final hand of the tournament, tilting turtle’s Q-K turned out to be better than his opponent’s A-10, landing two pairs by the time the river card opened. This wrapped up proceedings for the day. 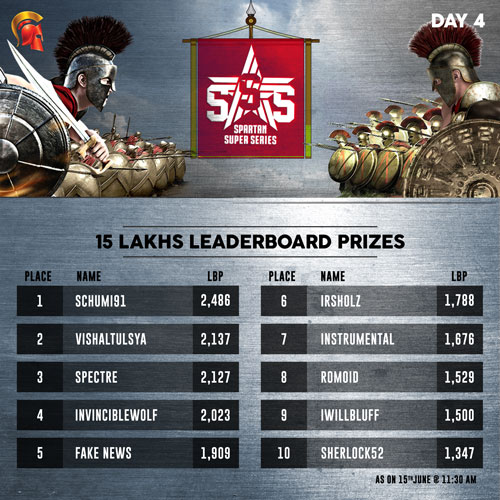 Keep reading GutshotMagazine.com for a daily roundup of the Spartan Super Series as well as updates on other poker tournaments from around the world.