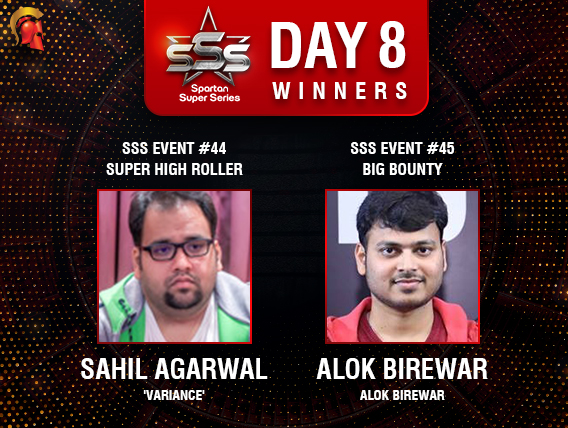 
Another day of Spartan Super Series (SSS) ended on a great note. A total of seven tournaments were scheduled on SSS Day 8 with the Super High Roller assuring INR 55 Lakhs in prize pool for INR 55,000 buy-in. Besides that, the triple features were also a part of the SSS and the guarantee of each event was successfully surpassed. And you can read here the complete summary of Day 8…

SSS #39 INR 1.25 Lakhs GTD
The day began with this tournament which had a buy-in of INR 440. A total of 391 runners were attracted to the virtual felts on Spartan Poker, and the top 27 places were paid. An anonymous player ‘Baba27’ topped this field and took home the title along with the first-place cash prize after the players struck a 3-way deal which saw ‘bob_marley’ in the second position.

SSS #40 Afternoon Showdown INR 2 Lakhs GTD
‘Vodafone77’ who wished to stay aonymous, conquered the field to grab the second SSS tournament of the day. He beat ‘Seiborg99’ in heads-up after his two pairs and King kicker secured him the title. ‘Vodafone77’ outlasted a total field of 337 entrants who had individually paid INR 660 buy-in. The advertised guarantee was surpassed to create INR 2.02 Lakhs and the top 27 finishers ended up earning INR 2,022 in prize money.

SSS #41 Afternoon Hi-Fi INR 3 Lakhs GTD
Afternoon Hi-Fi was hosted with a buy-in of INR 1,100 and attracted a total playing field of 336 entries. The top 27 places were paid with the min-cash being INR 3,360. Once again claiming the SSS title for the third time in a row was an anonymous player ‘Isildur5292’ took home the coveted title along along with the first-place cash prize. He beat ‘Banjo’ in heads-up in level #38 of the tournament with his two pairs of King and Five.

SSS #42 Dominator INR 6 Lakhs GTD
Thursday feature tourney on Spartan Poker was Dominator INR 6 Lakhs pulling out a total of 333 entries who paid INR 2,200 each. Coming out on top was ‘DONKAKING’ after the players settled for a heads-up deal in level 39 of the event that saw ‘oOgway77’ in the runner-up position and securing the second place payout.

SSS #43 Ultron INR 22 Lakhs GTD
Popular Thursday flagship event, Ultron was joined by 711 entrants after each one paid INR 4,400. The advertised guarantee crossed to become INR 22.84 Lakhs and the top 63 players earned a payout from the same. Outlasting the field was ‘Aarnav’ who eliminated ‘masterbluff’ in heads-up with his pair of Jacks over his opponent’s pair of Two.

SSS #44 Super High Roller INR 55 Lakhs GTD
A prominent name in the industry, Sahil Agarwal aka ‘Variance’ outlasted a field of 176 entries to take down the biggest guaranteed event last night. Agarwal railed out ‘Vaibhav Sharma aka ‘Nikka Zaildar’ in heads-up in level 42 of the tournament with his pocket Queens and added a huge title to his poker CV. The event was joined by a total of 176 players who chipped in INR 55,000 as buy-in, inidividually. This number saw the creation of INR 88 Lakhs in prize pool which was earned by the top 20 places securing at least INR 1.17 Lakhs as min-cash. Click here to read more.