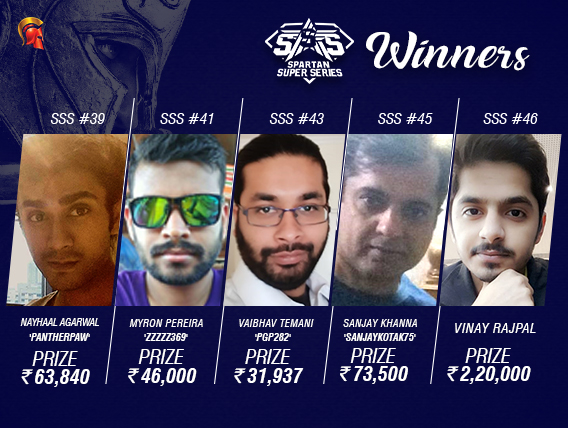 
This month’s highly anticipated online poker series in India, Spartan Poker’s Spartan Super Series (SSS) is in the books with the last day being hosted yesterday. A total of 8 events were on schedule, out of which the Main Event and the Sunday SuperStack were the biggest and saw massive turnouts. Apart from these, the 6 other tournaments also concluded successfully. Here’s a round-up of those:

The first one for the day attracted 118 unique players to the virtual felts and saw the prize pool cross the guarantee too. The top 21 positions were paid for a min-cash of INR 3,325 and winning the first-place cash prize of INR 63,840 was Nayhaal Agarwal aka ‘PantherPaw’. He beat ‘smoothcriminal’ in heads-up to bag the victory. The runner-up settled for INR 43,225.

Agarwal is the only player to have won three SSS titles in this edition, first the SSS #3 on Day 1 and then the SSS #35 on Day 6. He has run well this time and Spartan recognized his perseverance and awarded INR 50k extra for finishing 4th on the SSS Leaderboard.

The second one saw 176 unique players joining the felts for INR 550 buy-in. The top 27 places were paid for a min-cash of INR 1,800 and the player to ship the tournament was ‘vidyatammudu’ for INR 44,000. He/she beat ‘OrangeZuce’ in heads-up to secure the victory.

The final hand was played till the river, where the eventual winner went all-in with 7h Jh on the board of 7c Qd 5h 7s Ac. OrangeZuce called with Ah 8h but it was vidyatammudu who beat his Aces and Sevens with trips of Sevens and took home the title.

A total of INR 181 unique players signed up to the tournament for a buy-in of INR 880. The tournament saw the top 23 places getting paid and the player who grabbed the biggest pay-check was Myron Pereira aka ‘Zzzzz369’ for INR 46,000. He beat ‘M@neyM@ker’ in heads-up to secure the prize.

This was again a pre-flop all-in situation in the final hand. Pereira, with 4s 4h, raised all-in and got a call from his opponent who was packing Jh Kh. The board of Qd 3d Th 2s 5s proved indifferent and Pereira collected the pot and busted his opponent with Fours.

We contacted Pereira and he commented, “I always maintained a decent stack on the FT and subsequently became the chip leader in 3-handed. From there, I knocked out the 2nd biggest stack and had a 3:1 chip lead going into heads-up. In this edition of SSS, I reached the final two FTs of around 6 events. It was good to make a FT and ship it too.” Pereira, a fan of freezeouts, later suggested, “Spartan should have more freezeouts in its offerings!”

This tournament was played in the PLO format and attracted 92 unique players and saw the top 15 places being paid out of the prize pool for a min-cash of INR 2,250. Vaibhav Temani aka ‘pgp282’ won the tournament and earned INR 31,937 as the first-place cash prize, beating ‘MANUKING07’ in heads-up.

Temani railed his heads-up opponent in a pre-flop all-in pot, holding Ac 2c Qd Jh. He made Queens on the board of 5d 8c Kh Qh 4d which beat MANUKING07’s lesser pair of Tens. The runner-up settled for INR 22,000 as the second-place cash prize.

The tournament attracted 170 total unique players to the felts and saw the top 30 places being awarded with a pay-check. Playing well and emerging victorious was Sanjay Khanna aka ‘sanjaykotak75’ who took home INR 73,500 as the first-place cash prize. He beat ‘hempaces’ to secure his victory.

Khanna, holding 9d Qc in the final hand, shoved his stack on a turn board of 5d Qd Td 3h, hoping for a flush and pairing Queens already. His opponent also made Queens and called with Qh 2h. the river of 3h didn’t give a flush but was enough for Khanna to ship the tournament with a higher Nine kicker. The runner-up earned INR 51,450 as his cash prize.

The last tournament to wrap up the day and the series was a Sunday special called Sunday Prime, which attracted 313 entries (including 34 re-entries and 103 re-buys). The top 27 places were getting paid for a min-cash of INR 9,000 and overcoming the field and bagging the heaviest cash prize of INR 2,20,000 was Vinay Rajpal.

Rajpal was enthusiastic about his win and spoke to us saying, “Spartan SSS gives every player a shot at winning their high value tournaments and make it big in the community. The brand is one of India’s leading online poker platforms and as an industry giant, they often introduce some of the biggest and the best promotions for their loyal users.”

About his past achievements he said, “I have been playing professionally since the past 1 and a half year and since then have won more than 10 leaderboards on PokerBaazi. My previous highest score online was INR 4.5 Lakhs in PPL last year and INR 7.2 Lakhs in WPT 35k event on live felts. Lastly, I also want to specially thank Gaurav Sood for guiding me and helping me improve my game.”

This month’s SSS wrapped up for the month with Sunday Prime and huge cashes were awarded throughout the series. The schedule for next SSS is already brewing according to a Spartan spokesperon so stay tuned to GutshotMagazine.com for all the updates from the upcoming SSS and other such events from around the world.