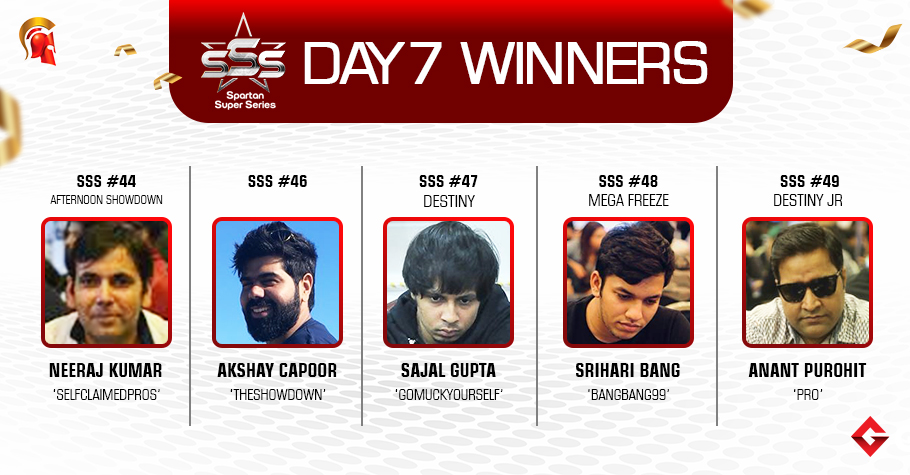 
We are halfway past the exciting April edition’s Spartan Super Series (SSS) and Spartan Poker is always known for bigger guarantees. Spreading out a total of 78 events and assuring INR 11+ Crore GTD, each day experiencing a surge of players. Yesterday too hosted 7 tournaments with Destiny 14.0 INR 45 Lakhs GTD being the major attractions. So, keep reading the summary below of SSS Day 7…

The day started with the first tournament attracting a field of 396 entries after each one paid INR 550. Out of this number only the top 31 finishers pocketed a share from the prize pool. It was ‘Virat183’ to top the list after the players settled for a 6-way deal and bagged the winner’s title along with the prize money while his opponent and the winner of SSS Day 6 Pratik Taank aka ‘CleanSweep888’ settled in the second position.

Online crusher Neeraj Kumar aka ‘SelfClaimedPros’ rode past the field of 377 entries to take down the Afternoon Showdown yesterday. The event saw each player chipping in INR 2,200 with only top 31 finishers returning home after securing at least INR 7,040 as min-cash. The event concluded in level 42 when the players struck a heads-up deal which saw Kunal Sharma aka ‘cvc’ in the runner-up position.

Taking down back-to-back tournaments, once again ‘Big Fiszh’ captured the winner’s title after triumphing Deepstack Bounty yesterday. Top 31 players locked INR 4,400, a share from the final prize pool but the winner took away the largest chunk after the players settled for a heads-up deal which saw his opponent ‘Bholebabaa’ earning the second-place payout for his efforts.

The fourth tournament of the day attracted a total of 244 entries after each one chipped in INR 1,100. It was Akshay Capoor aka ‘TheShowdown’ who claimed the first-place prize money eventually after the players decided to strike a heads-up deal. Gradually, ‘KarmaPoker’ secured the runner-up position who also secured a slice from the prize pool.

The popular Wednesday marquee SSS #47 Destiny on Spartan Poker attracted a massive field of 1,076 entries enough to crush the advertised guarantee and create INR 53.80 Lakhs in prize pool. The top 85 finishers earned a min-cash of INR 14,526. The last man standing at 4:23 am was Sajal Gupta aka ‘GoMuckYourself’ who emerged victorious after outlasting Anmol Mehta aka ‘anzzzzz’ in heads-up to bag a 7-figure score!

Mega Freeze pulled out a total of 225 entries out of which only 31 ended up earning a payout. Coming out on top was circuit popular Srihari Bang aka ‘bangbang99’ who captured the first-place prize money while his opponent Lakshpal Singh aka ‘LuckyBhai$’ earned the second place payout.

It was a prominent name in the industry Anant Purohit aka ‘Pro’ who took down last night’s final tournament. A total of 708 entries drew a final prize pool of INR 7.08 Lakhs and the top 60 places earned a min-cash of INR 2.832. Purohit captured the winner’s prize money after the players settled for a heads-up deal which eventually saw ‘Lordofcards31’ in the runner-up position.