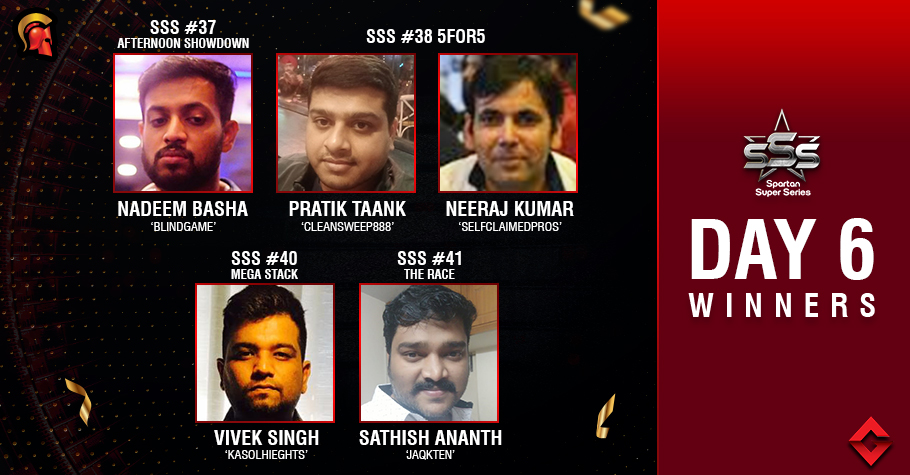 
The announcement of extension of lockdown in the country means you have more time to grind online! The fantastic Spartan Super Series (SSS) is currently underway on Spartan Poker and so far 42 events have come to conclusion. Yesterday hosted another set of 7 tournaments with Tuesday feature Mega Stack INR 30 Lakhs GTD and 5FOR5 being the biggest attraction. And here is a complete list of events and winners of SSS Day 6…

The action began with a total of 412 entries and eventually only 31 could earn a min-cash from a slightly bigger prize pool of INR 2.06 Lakhs in the first tournament of the day. Capturing the title was ‘Big Fiszh’ after the players settled for a heads-up deal which saw his opponent ‘subbu10’ in the second position.

Nadeem Basha aka ‘blindgame’ took down event #37 Afternoon Showdown INR 8 Lakhs GTD yesterday. A total of 365 hopefuls joined the field after chipping in INR 2,200 out of which only 31 received a paycheck of INR 7,040 at least. The tournament ended in level 49 when players struck a heads-up deal which saw ‘abhi2345’ in the runner-up position.

The third event assured INR 50K to top 5 players! A total of 342 entries joined the field to hunt for the cash prize. Coming out on top was Pratik Taank aka ‘CleanSweep888’ (1st) followed by Neeraj Kumar aka ‘SelfClaimedPros’ (2nd), ‘barneyboy’ (3rd), ‘VishalMaharaj’ (4th) and ‘jason’ (5th). And that’s not it, the top 25 places also walked out with a portion from prize pool.

After paying INR 1,100 a total of 281 players joined the field. The fourth tournament of the day saw online reg Rugal Advani aka ‘Smokijoejr’ topping the list after the players settled for a 4-way deal which eventually saw circuit grinder Neeraj Kumar aka ‘SelfClaimedPros’ securing the second position.

Tuesday flagship tourney on Spartan Poker was Mega Stack which attracted a massive field of 1,143, enough to smash the advertised guarantee and create INR 34.29 Lakhs in prize pool. Coming out on top was Vivek Singh aka ‘KasolHieghts’ while his opponent Pranav Anand aka ‘mithrandir16’ settled in the runner-up position after both players settled for a heads-up deal.

Another major event that caught the public attention was The Race which kicked off at 9:30 last night. A total of 778 entries joined the field after each paid INR 1,650. The top 63 players ended up earning a portion of bigger prize pool of INR 11.67 Lakhs. Powering through the field was online crusher Sathish Ananth aka ‘Jaqkten’ who defeated ‘Cassandra’ in heads-up and bagged the winner’s title.

The final tournament on SSS Day 6 was Tuesday Flash which garnered a total of 424 entries after the players agreed to chip in INR 1,100 buy-in amount. Capturing the winner’s title along with the first-place prize money was ‘FunkeyFox’ who railed out ‘whateverhaha’ in heads-up after his full house remained undefeated over his opponent’s two pairs of KKQQ.