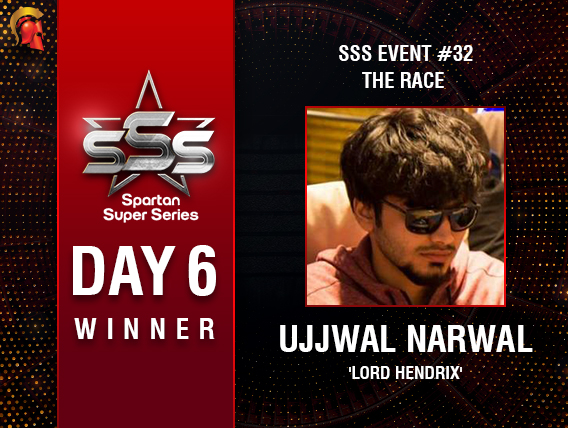 
With the coronavirus scare and postponement of various live poker tours, the poker fanatics took to the online tournaments, crushing and cramping the virtual felts. Yesterday wrapped up a successful Spartan Super Series (SSS) Day 6 on Spartan Poker and the major event was Tuesday’s Mega Stack prosming INR 22 Lakhs in prize pool. And here is the complete summary for your reference…

The first tournament of Day 6 had a fixed buy-in of INR 330 attracting a total of 456 entrants who pounced on the field and surpassed the advertised guarantee to create INR 1.36 Lakhs in prize pool. This amount was distributed among the top 31 finishers who locked at least INR 1,204 as min-cash. Coming out on top was ‘whateverhaha’ who clinched to the first-place prize money after the player decided to settle for a heads-up deal which saw ‘blom89’ in the runner-up position.

A total of 347 runners entered the Afternoon Showdown which kicked off at 2 pm yesterday after paying INR 660 buy-in, individually. The top finishers strolled out with INR 1,832 as min-cash, a share from the bigger and final prize pool of INR 2.08 Lakhs. It was ‘Boris brejcha’ who defeated ‘Uknapdmj’ with his trip 4 and claimed the winner’s title.

At 4 pm yesterday the Afternoon Hi-Fi began which was joined by 318 entrants who captured their seats to hunt for the winner’s title. Once again, the assured amount was surpassed creating INR 3.18 Lakhs in prize pool which was later shared among the top 27 places with each one promised INR 3,180. Seizing the prize money was ‘kracker’ who defeated ‘Sonudon’ in heads-up with his pair of Four over his opponent’s Ace high card.

The Tuesday feature on Spartan Poker commenced at 7 pm, the Dominator garnered a total of 306 entries who chipped in INR 2,200 each. Topping the list was ‘Isildur5292’ after the players struck a heads-up deal which saw Devvrat Arya aka ‘RickdickulouS’ in the runner-up position.

The highest guarantee tournament and the popular Tuesday marquee, Mega Stack enrolled 830 hopefuls. This number was enough to draw a bigger prize pool of INR 24.90 Lakhs whose largest chunk was taken away by ‘Tiger10’ The anonymous grinder defeated Rishab Malik in heads-up with his higher pair of Jacks over Malik’s 66.

SSS Day 6 ended with a well-known circuit grinder Ujjwal Narwal aka ‘Lord Hendrix’ who rode past the field of 679 entries to take down The Race last night. Each player entered the tournament paying INR 1,650 as buy-in which generated a final prize pool of INR 10.18 Lakhs. This amount was shared among the top 63 places who received INR 4,430 as min-cash. Narwal grabbed the title after eliminating ‘parthaggarwal’ in heads-up atfter dominating him with his trip queens.