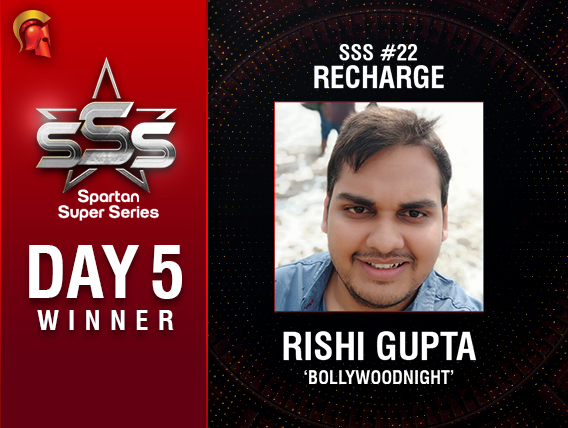 
Its difficult to step out of your home and polish your skills at live tours due to COVID-19, so Spartan Poker is right here with the monthly, Spartan Super Series (SSS) and you can comfortably grind online as this 11-day series assures INR 7+ Crore! Five days have already gone and now only 42 events remain. Also, yesterday halted with another 5 tournaments and the triple features were also a part of the ongoing series. You can read the complete summary of SSS Day 5…

INR 220 was the buy-in to enter the first tournament which displayed INR 1 Lakh GTD. The guarantee was crossed after 534 runners joined the field, creating INR 1.06 Lakh in prize pool out of which 39 finishers earned a paycheck. Coming out on top was online grinder ‘ONmyMAC’ who took home the winner’s prize money after the players settled for a heads-up deal which saw ‘Sergio’ in the runner-up position.

The second tournament of the day kicked off at 2 pm registering 282 entries after each paid INR 660 buy-in. A min-cash of INR 2,000 was assured to the top 27 players, but the one to take home the largest share from the prize pool was ‘AceQQ’ who eliminated ‘Seiborg09’ in heads-up with his pair of Aces over his opponent’s pair of Nines.

At 4 pm, Afternoon Hi-Fi kicked off registering a total of 312 entrants who saw the creation of bigger prize pool of INR 3.12 Lakhs. The top 27 finishers benefited from the same but the one to grab the largest portion was ‘jstbfrnds’ after the players struck a heads-up which saw online reg Saumil Krishnani aka ‘Ro$a’ in the runner-up position.

INR 2,200 was the buy-in to enter Spartan Poker’s featured tournament Dominator INR 6 Lakhs GTD which began at 7 pm. The entire event attracted a total of 310 entrants who pounced on the field to surpass the advertised guarantee and create INR 6.20 Lakhs in prize pool. Capturing the first-place prize money was Rahul Lal aka ‘LuckyLuciano’ who eliminated ‘The Sightseer’ in the second position.

Monday tourney and the popular one, ReCharge attracted a total of 783 entries after each paid INR 2,200. Slightly crossing the assured amount and collecting a total of INR 15.66 Lakhs in prize pool, the top 71 finishers ended up earning a min-cash. It was Rishi Gupta aka ‘BollywoodNight’ to seize the title after beating Sreeharsha Boneni aka ‘yUDdam’ in heads-up with his pair of Nine.

The final tournament of SSS Day 5 was Deep Freeze which garnered a total of 120 entrants after each chipped in INR 6,600. The top 17 finishers locked INR 12,560 as min-cash. Topping the list and claiming the winner’s title was online reg ‘pot-pan’ who defeated Ankit Wadhawan in heads-up with his trip Kings over Wadhawan’s pair of Aces boosting his poker bankroll.