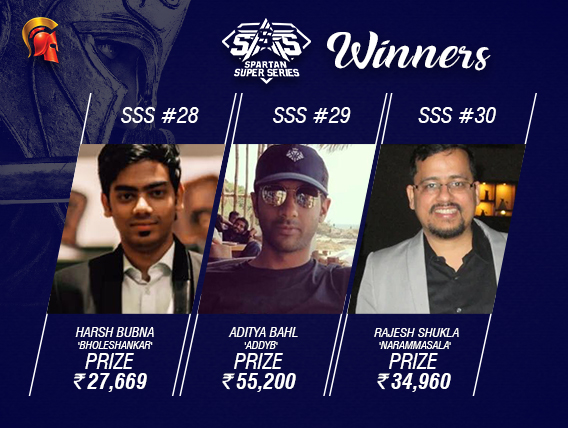 
Another 6 tournaments were lined up yesterday on Spartan Poker, as part of the ongoing Spartan Super Series (SSS). One of the major tournaments of the day was the SSS Triple Bubble won by Ashish Ahuja, but plenty of other side events also took place, in addition to the INR 50 Lakh GTD Elite. Keep reading for a complete lowdown on what happened on SSS Day 5..

As usual, the first couple of tournaments of the day are smaller ones and this one had an INR 2 Lakh guarantee with a buy-in of INR 880. The prize pool was distributed among the top 18 players from the field of 108 unique players, each receiving a min-cash of INR 3,200. However, at the end of the tournament, it was ‘Rated R’ who emerged victorious, beating Spartan Poker regular ‘JuntaDel’ in heads-up to claim the top prize of INR 51,500.

The second tournament was an even smaller one with a buy-in of INR 330, something that a large percentage of Indian poker players can afford. 160 unique players meant the guarantee was passed and the resulting prize pool of INR 1.2+ Lakh was shared among the top 24 places with a min-cash of INR 1,203.

The winner turned out to be Harsh Bubna aka ‘Bholeshankar’ who had a brilliant time in the last SSS series on Spartan. He beat ‘unruhmlich’ in heads-up to win INR 27,669 in prize money. When Gutshot contacted the player, he said, “It feels good to finally ship one SSS event. I was runner up in four SSS events last month so had to break the jinx for once. I’m loving the structures and looking to grind all the remaining tournaments.”

In the November edition of Spartan’s 5For5, Aditya Bahl aka ‘addyb’ emerged as one of the winners and yesterday, he won another title on Spartan Poker, this time being a SSS title. With a buy-in of INR 1,100, a total of 106 players entered the tournament and it wasn’t until Level #33 of the tournament (Blinds 9,000/18,000-2,000) that Bahl was declared the champion.

He beat ‘Akkiaaru2204’ in heads-up and won the top prize of INR 55,200 last night. When contacted by Gutshot, Bahl said, “It was a serious grind. I’ve never been part of a tourney in which the bubble takes over an hour. These high-value tourneys are a really nice way to hone one’s skills, especially the patience skill. The SSS series is a great experience and one that all players need to try to max in terms of volume”

INR 550 was the buy-in to this side event and it was won by none other than Rajesh Kumar Shukla aka ‘Narammasala’ who seems to love the Spartan Super Series. Not only has he won plenty of SSS titles, but Shukla has also won the SSS Leaderboard twice. Could he be one of the best players in SSS history so far? Yesterday, he defeated ‘vivid_sachin’ in heads-up to win the title and INR 34,960 in prize money.

It was the biggest tournament of the night and the second biggest of the series itself, so it’s a pity we couldn’t report the winner of The Elite, who preferred to stay anonymous. The tournament turned out to be a successful one, with 213 entries registering to beat the guarantee and create a new prize pool in excess of INR 53 Lakh, which was shared among the top 21 finishers.

The 6-Max tournament had a buy-in of INR 27,500 so you would know that only the best in the business would take part in such an expensive affair. Eventually, it was ‘Jordanjann’ who claimed the title, beating ‘BobbyAxelrod1’ in heads-up for the outstanding cash prize of INR 12,38,062. BobbyAxelrod1 finished second and had to settle for INR 8,38,687 in prize money.

Two days are left in this edition of the Spartan Super Series and you can keep following GutshotMagazine.com for all timely updates on this series on Spartan Poker.