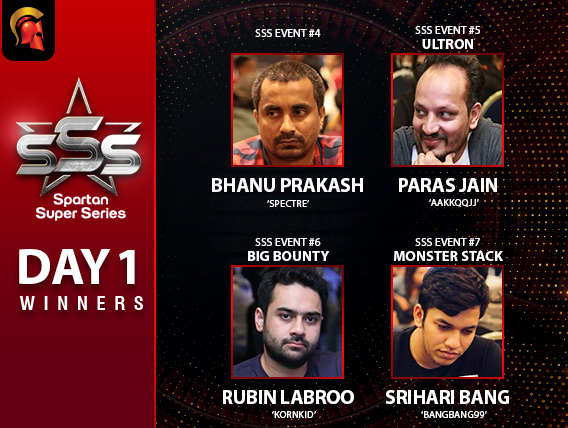 
Spartan Poker’s April schedule is packed with spectacular offers, so let’s unbox the first surprise! Here comes the most anticipated poker tournament series running between 9 to 19 April, crammed with two Millionaire and Highroller tourneys, the Spartan Super Series (SSS). These 12-days will be scattering 78 tournaments assuring a whopping INR 11+ Crore GTD! The SSS Day 1 is already in the books and here is a complete summary of the winners…

Day 1 of the April month’s SSS commenced at 12 pm which eventually attracted a total of 650 runners after each paid a buy-in of INR 550. Out of this number only the top 47 finishers earned INR 1,852 at least. It was an anonymous player ‘Big Fiszh’ who was announced as the official winner after the players settled for a 3-way deal that saw ‘megamindd71’ in the second position.

A total of 447 entries pounced on the field to surpass the guarantee and create INR 8.94 Lakhs in prize pool. After hours of grinding session, it was Arpan Majhi aka ‘Novus’ who captured the first-place prize money beating ‘ErrorDetected’ in heads-up with his 88 over his opponent’s Ace high. However, the top 39 ended up securing a min-cash of INR 6,168.

The third tournament was scheduled at 4 pm which displayed a fixed buy-in of INR 1,100. A total of 554 entries logged in and only the top 54 could take home a piece from the final prize pool. The tournament ended after ‘_omkar’ settled in the runner-up position and the last man standing was Chandran Ramasamy aka ‘mehchan01’ who captured the winner’s title.

The 4th tournament of the day pulled out 367 entries with each one paying INR 1,100. The final prize pool was drawn to be shared among the top 31 places with each one receiving a minimum of INR 3,520. The event saw the rise of online reg Bhanu Prakash aka ‘spectre’ who seized the winner’s title along with the prize money after defeating ‘lailaterilelegi’ in heads-up.

The event was the featured tournament for Thursday and saw a massive field of 956 entries after each one chipped in for the biggest tournament and its buy-in of INR 4,400. The prize pool was smashed to become INR 38.24 Lakhs which saw the top 78 spots receiving a share from the same. It was circuit grinder Paras Jain aka ‘AAKKQQJJ’ to top the field after the players struck a heads-up deal which saw ‘bharat29’ in the runner-up position.

Another attraction on Spartan Poker was Big Bounty that enrolled a pretty good field that the prize pool INR 9.46L was distributed among the top 39 places and the one to walk out with the biggest chunk of the same was circuit popular Rubin Labroo aka ‘kornkid’ who eliminated ‘minkstaa’ with his higher pair of AA over his oppnent’s TT. Thus, claiming the winner’s title and boosting his poker bankroll.

The final tournament of the day attracted 782 players after each paid INR 1,100, dragging the advertised guarantee to collect INR 7.82 Lakhs in prize pool. Srihari Bang aka ‘bangbang99’ conquered the field and captured the cash prize defeating ‘mj333’ in level 50 of the tournament with his two pairs of 8866 over his opponent’s single pair of 66.