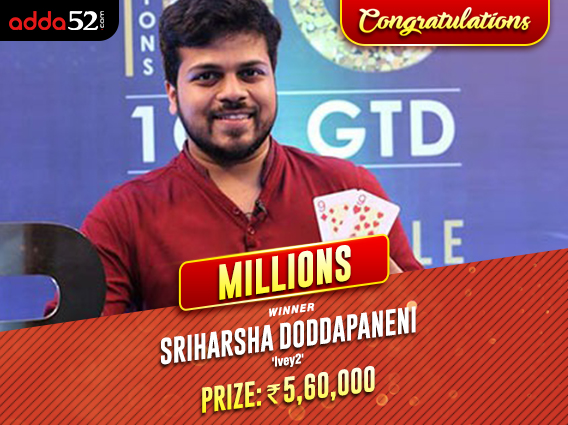 
Sriharsha Doddapaneni is running red hot in recent months. He won Spartan Poker’s Destiny 7.0 SnG Finale, earning a coveted INR 10 Lakhs all-expense paid trip to play in Europe. He was playing anonymously under ‘GTOsucks’ on Spartan and decided only to reveal his name after winning the SnG, which he eventually did.

Yesterday, being a Sunday and a work off day for almost everyone, Adda52 decided to host 5 tournaments under ‘Sunday AF’ promotion and Doddapaneni aced another big tournament across the Indian online felts, Adda52 Millions AF INR 20 Lakhs GTD.

Doddapaneni overcame a tough field of 131 unique players, each coughing up the INR 11,000 buy-in to play in the tournament. Play began at 8 pm sharp yesterday evening and was in the books by 3.51 am today morning. Doddapaneni, playing under ‘Ivey2’, earned INR 5,60,000 as first-place cash prize, beating ‘Bigbluffs’ in heads-up. The runner-up took home INR 3,36,000 as his/her cash prize.

Doddapaneni needs no introduction but for the sake of new entrants into the scene, they should know what this man has achieved. Apart from bagging multiple deep runs and title wins in online events previously like PokerBaazi BSS Superstack, Adda52 Whale, 9stacks Sunday Slam, etc., he also has a strong presence on live felts.

He earlier won the DPT Colossus 200k SHR back in April 2018 and earned his career best live cash of INR 28.7 Lakhs there. He even won the Adda52 Big Millions 2.0 in Goa last May for INR 25.5 Lakhs. The cash he earned last night is a huge one and will prove to be another big addition to his bankroll too.

Since it was a Sunday, almost all major platforms along with Adda52 hosted big guarantee tournaments considering many people were free from their jobs for the day. Finishing 3rd among top 19 paid places (min-cash INR 20k) was well-known community entity Akshay Nasa aka ‘vibaks’ (3rd – INR 2,54,000).