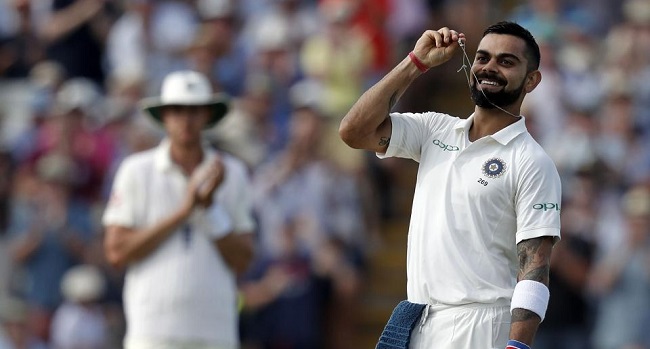 
There was a lot of talk about Virat Kohli not being able to play on England tracks, but if you know the man, you know that he works on every little aspect of his game where he is lacking. ‘IF’ he is ever lacking. He was poor on India’s last tour to England in 2014 but he scored more runs in his first knock here than he did in the complete test series of 2014.

He made a huge impact on the game in the field itself, leading to an England collapse on Day 1, and then completely ruled the day with the bat. India bowled out England for 287 and then started well in the reply, scoring a 50-run stand for the opening partnership between Murali Vijay and Shikhar Dhawan.

However, the Indian batsmen played a few rash shots as they fell from 50/0 to 59/3 and weren’t able to play the swinging deliveries that debutant Sam Curran was pitching up to them. Regular wickets fell through the Indian innings and Curran became the youngest English bowler to get a 4-fer, beating Bill Voce’s record that dates back to 1930.

One man who had a point to prove was the Indian captain, Virat Kohli. He was booed by the Edgbaston crowd when he walked out to bat, but that same crowd was up on their feet, applauding him as he brought up his 22nd test century, playing carefully as he was running out of partners.

He was on 97 when the 9th wicket fell but Kohli knows how to judge every possible situation in a cricket match and that’s what he did perfectly again, adding 57 vital runs for the last wicket stand that lasted 12+ overs. He shielded Umesh Yadav well, who only scored 1 run in that partnership, while also accelerating and decreasing the deficit whenever possible.

India ultimately fell short by 13 runs as Kohli slashed one to point and was dismissed for 149, in what was one of the best innings by an Indian captain in England. He then tossed the new ball to Ravi Ashwin, who struck with a classic off-spinner’s delivery to Alastair Cook and England went into Stumps on Day 2 at 9/1, with a lead of 22.

Keep reading GutshotMagazine.com for a daily update on the 1st Test between India and England.