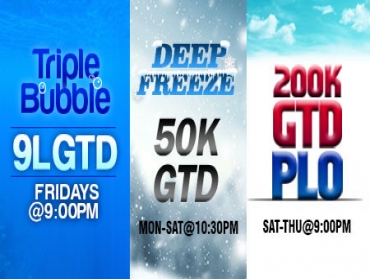 
Innovation is the key to staying ahead of the competition and that’s why The Spartan Poker is always bringing out new products and tournament offerings for its loyal poker players. Now, they have launched three new poker tournaments on their platform, effective from 1st August 2018.

Here’s more on these three tournaments:

This is the most exciting of the three new tournaments, and it introduces the novel concept of multiple bubbles! The new Triple tournament features not one, not even two, but three payout bubbles! Now, you won’t regret being the bubble boy/girl anymore. As the name suggests, The Spartan Poker will give additional prizes (over and above the usual cash prizes) to three specific players who finish on the three bubbles at different stages. 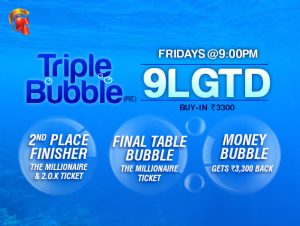 Possibly the most heartbreaking situation a player can be in, is grinding a tournament for a number of hours only to fall agonisingly short of the money. The first of the bubbles to get a prize is the money bubble player i.e. the player who busts immediately before the pay-outs positions begin. The money bubble player will get his/her initial buy-in back of INR 3,300.

The next bubble to paid out is the player who busts just outside the final table. The final table bubble player will get a free ticket to the next ‘Millionaire’ tournament that has a guarantee of INR 1 Crore. We’ve been told it is an 8-handed table, so this free Millionaire ticket worth INR 7,700 will go to the player who gets knocked out in 9th place.

There is one final bubble prize which will be paid to the player who finishes in second place in this tournament. The first runner-up player will get 2 free tickets. Not only will this player get a ticket into the afore-mentioned 1 Crore GTD Millionaire tournament but also another ticket worth INR 5,500 into the next Two of a Kind (2.o.K) tournament. Remember the 2.o.K gives out a massive INR 15 lakh GTD to 1st and 2nd place finishers each in that tournament which takes on the first Sunday every month at The Spartan Poker.

The Triple Bubble features a guaranteed prizepool of INR 9 Lakh GTD and will take place every Friday at 9:00 pm.

Here’s a tournament for the Pot Limit Omaha (PLO) enthusiasts. As the name suggests, the tournament has an INR 2 lakh GTD prize pool. The INR 2,200 buy-in tournament will run from Saturday to Thursday at 9pm IST, and will not feature on Fridays, as that spot belongs to the Triple Bubble tournament as mentioned above. 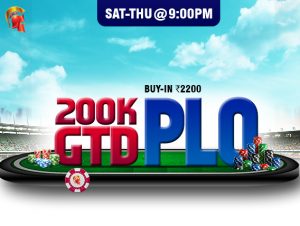 The third new tournament to be introduced by Spartan this August is the ‘Deep Freeze’ which will delight fans of the freezeout format. This tournament will have a buy-in of INR 990 and an INR 50,000 GTD prize pool. As the name suggests, it will be a freezeout tournament which means you get to buy-in just once and if you bust, that’s the end of your tournament. The Deep Freeze will run at 10:30 pm every day between Monday to Saturday. 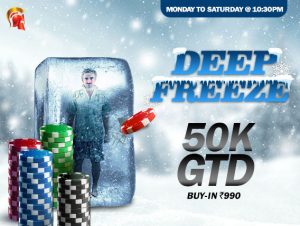 These new tournaments will feature for the first time on Spartan clients tomorrow i.e. 1st August. While all tournaments sound like great offerings, it’s quite likely the Triple Bubble will turn out to be a huge player favourite. Keep reading GutshotMagazine.com for more updates from the world of poker.