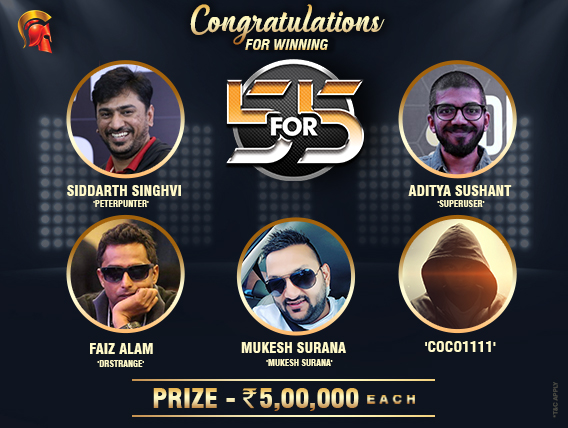 
Every month, Spartan Poker, one of the leaders in the online poker industry in India, hosts signature tournaments with huge cash prizes awarded to the winners. Among those tournaments is the 5 For 5 INR 5 Lakhs GTD each for top 5. This tournament unfailingly attracts the best of the bests in the game and ensures a tough fight for all those involved.

Yesterday was a Sunday and Spartan decided to host another edition of the 5 For 5, which attracted an enormous field of 728 entries (including 105 re-entries and 230 re-buys). The resulting prize pool came to INR 40,04,000 out of which top 60 places were paid a min-cash of INR 10,010. The field was studded with community celebrities.

The 5 players emerging victorious out of the tournament were Siddarth Singhvi aka ‘PeterPunter’, Aditya Sushant aka ‘SuperuSer’, Faiz Alam aka ‘DrStrange’, Mukesh Surana aka ‘Mukesh Surana’ and ‘Coco1111’. They all earned INR 5 Lakhs each as their respective cash prizes after over 9 hours of tough action (6 pm to 3.17 am) in the tournament.

The last hand yesterday in the Spartan tournament was a 3-way one between Singhvi, Sushant and the eventual 6th place finisher ‘Mbappe’ who later took home INR 2,50,250 as his/her cash prize. They went all-in pre-flop and were looking to make a good hand. The board revealed 6c Ac 7s 4h Ah and gave two pairs for Sushant who had Ts Tc. He swept the table clean and collected both main and side pots.

Coming to the winners, two of them, Singhvi and Sushant are well-known and respected community players with enormous records behind them. Sushant brought home India’s first WSOP bracelet back in 2017 and subsequently shipped significant tournaments. Singhvi also has a strong presence in the community. He even won a chance to play with Finnish poker legend Patrik Antonius last November when Delta Corp invited him for its 10th year celebrations.

Alam is good player and has made a few deep runs previously on various platforms including Spartan. Surana, who hails from Chennai, also has showcased his impressive poker skills in the past, winning plenty of cashes. He won IPC 30k Big Game live event back in 2016 for a decent INR 11.7 Lakhs. Last night’s amount will see him get a good bankroll boost.

We even spoke to one of the winners Faiz Alam and he was very content after his win last night. Tallking about the gameplay he said, “This was the sickest Final Table I ever played. The road to the FT was pretty smooth sailing for me. The fun started when we got to 6-handed. With top 5 players getting paid a masssive INR 5 Lakhs and the 6th one missing out on the bonanza, the pressure was intense. The chip leader by a massive margin Siddarth Singhvi started shoving any 2 with rest of us having an average of 4 big blinds. I got a lucky triple up when my QQ held against Singhvi’s KQ and Mbappe’s AK in a 3-way all-in pot. Mbappe was left with less than a blind, and finally Sushi [Sushant] had to take matters in his own hand to end the sickness.“

Alam elaborated saying, “It was a big relief when the tourney finally ended and I somehow managed to scrape through to the top 5. The FT showed what ‘ICM Pressure’ truly is. Overall, it was a super enjoyable grind with a blockbuster climax. I have been on a decent run of late, having won PokerBaazi Endeavour couple of weeks ago and finishing runner-up in Spartan Sunday SuperStack last week.I just hope to carry forward the decent run and I continue to learn and improve under the guidance of Aditya Agarwal who is just on a different planet when it comes to poker. Shout out to the #PokerGuru team-mates for cheering me and to Vikram ‘Lungi’ Kumar and Kartik Ved for their support.“