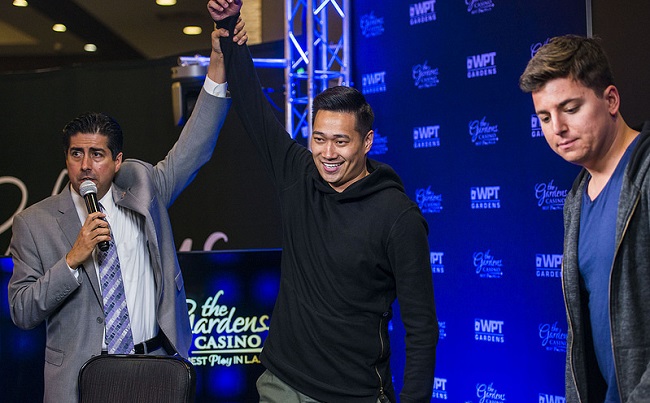 
The latest stop of the World Poker Tour (WPT) was at The Gardens Casino in Hawaiian Gardens, California. This WPT Gardens poker festival was scheduled between 21-26 July, and the $5,000 buy-in Main Event has come to an end just a few minutes back, after 6 days of grinding.

The tournament included two days of starting flights and quite a few top names were a part of the event. 584 entries were registered to the tournament and a prize pool of nearly $3 million was generated. At the end of it all, it was Simon Lam who shipped the tournament, a poker player from Brooklyn, New York.

The player has mostly played tournaments in USA throughout his live poker career which spans nearly a decade now. However, this victory was his biggest ever, taking home $565,055 for first-place. This was more than double his previous best score of $250,970 and he has taken his career winnings past $1.9 million.

This first-place prize includes a $15,000 entry into the WPT Tournament of Champions, which will be played at the end of the WPT Season 17. The previous season’s ToC was played just before the start of the 2018 WSOP series in May, and that was shipped by USA player Matt Waxman.

The final table consisted of pros like Craig Varnell, Jake Schindler and others. Schindler was low on chips in 3-way play but did well to recover and reach heads-up against Lam. However, Lam steadily built his lead and both players went all-in in the final hand, with the flop opening J 7 2. Lam held J 9 and Schindler held J 8, needing to improve on his hand. However, the next two cards opened 3 and 2 and gave Lam a win with J-pair and a higher kicker.

Keep reading GutshotMagazine.com for a daily update on top poker tournaments from around the world.