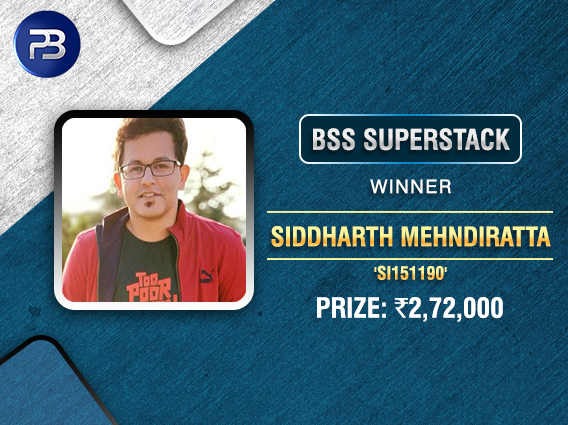 
PokerBaazi is among the top brass of the Indian online poker scene, which can afford to host feature tournaments guaranteeing high prizes every day of the week. Sunday in particular is a special day for Indian poker enthusiasts as many platforms host high-stakes tournaments on the day. One such tournament is the Baazi Super Sunday (BSS) SuperStack.

The BSS SuperStack is hosted every Sunday on PokerBaazi. Yesterday’s tournament had INR 15 Lakhs in guaranteed prize pool and started at the usual time of 7pm. The tournament drew 179 entries in all (141 re-entries), with an entry fee of INR 5,500. The guarantee was surpassed, as usual on PokerBaazi, creating a new prize pool of INR 16 Lakhs.

Top 38 places were paid in the event, which ended at 1:57am today morning. The crowned champion to emerge after the 7-hour grind was Siddharth Mehndiratta aka ‘si151190’. He took home INR 2,72,000 as first-place prize money, which equals 17% of the total prize pool.

Mehndiratta is not exactly new to poker or shipping tournaments. He has cashed out in online tournaments in the past, including shipping the BSS SuperStack a few months ago. He also has two recorded pay-outs in the live scene, both at the Deltin Poker Tournament. With this welcome amount added to his bankroll, we hope he plays in many more future tournaments and cashes out big in them too.

After his win, Gutshot got in touch with Mehndiratta, who recovered from an almost zero-stack position to go on and win the tournament. He had this to say, “Coming back from half a big blind with four people left and then going on to ship the whole tournament makes this victory an even more special one for me.”