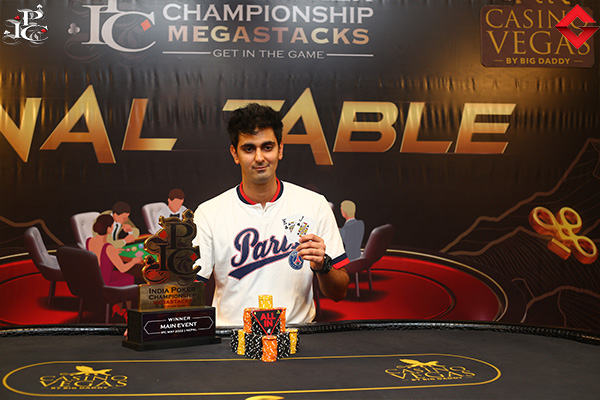 What a battle it was!

Mumbai’s Siddhanth Kripalani was always known as an online crusher but now he’s got India’s biggest live poker title under his belt as well. It obviously wasn’t going to be an easy ride to beat a tough field of 334 entries but he managed to do so and keep his chip lead all the way through the final table. Up against Indian poker legend Aditya Sushant in heads-up, he kept up the intensity even after the deal was discussed and went on to win the title as well.

Chip leader Kripalani called the 120,000 blinds preflop, and India’s first WSOP bracelet winner and IPC 2010 Main Event winner Aditya Sushant checked from the big blind. The flop opened to 9 ❤ Q ♣ 3 ❤ , and Sushant checked even though he hit a 3-pair with J ♣ 3 ♦ in hand. Kripalani, who had K ♣ J ♠ in hand, bet 140,000, and it was called by Sushant. On the turn of T ♦ , Sushant checked again, and Kripalani bet 600,000, which was raised to 1300,000 by Sushant. Kripalani called and the river showed a A ♣. Sushant shoved all-in seeing the river, and the large-stacked Kripalani excitedly called having hit a straight on the river. Ultimately, it was Kripalani, who rivered a T-A straight, and both players stepped ahead for a hug. The latest IPC ME winner cashed a brilliant ₹39,72,700 as the top prize.

Stay tuned to Gutshot Magazine for coverage of more exciting tournament series’ in the future. Till then ‘Adios, folks!’