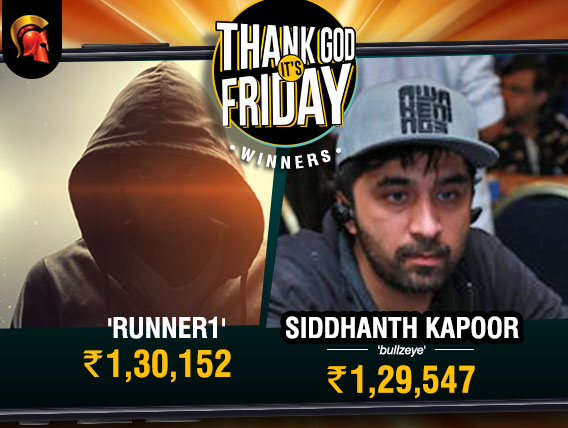 
Thank God It’s Friday (TGIF) was the chorussed yell of 80-90% of Indians last night as the working week ended for most, and the much-awaited Friday night had arrived. For poker players however, the night wasn’t different from any other one. Wake up, eat, grind, repeat. And maybe sleep once the long poker sessions end.

Spartan Poker hosts quite a few exciting poker tournaments through the week and one of their latest offerings is TGIF INR 7 Lakh GTD, with a buy-in of INR 2,200. A total of 319 entries each paid this buy-in last night to be a part of the tournament, which ended up missing the guarantee slightly, and eventually, the top 27 places shared the prize pool with a min-cash of INR 7,000.

However, the biggest shares of this prize pool went to two players at the end of the night – ‘Runner1’ and ‘bullzeye’. These two players would’ve not wanted to continue the heads-up grind for too long and decided to cut a deal, with both players taking away nearly equal prizes, but Runner1 being an inch ahead at the time of the deal.

Runner1 took away the top prize of INR 1,30,152 but the player decided to stay anonymous after the win. His heads-up partner bullzeye is none other than Siddhanth Kapoor, actor, DJ, entrepreneur and poker player. Here, he won INR 1,29,547 as his share of the chop on Spartan, a pretty decent bankroll addition.

Siddhanth is a regular grinder on Spartan Poker and yesterday turned out to be a good day for him in online poker. Along with this chop on Spartan, he also chopped the INR 1,650 ‘The Classic’ on PokerStars India, while also ending with a massive stack on Day 1B of the National Poker Championship on Adda52.

When Gutshot caught up with Siddhanth Kapoor, he said, “Last night’s TGIF turned out to be one of the toughest Final Tables I’ve played in a really long time, with quite a few good players in the mix. I’m also playing the NPC, where I also came across some fantastic players. There’s a player called ‘vibaks’ (Akshay Nasa) who did brilliantly, chasing me throughout and coming from a very low stack to among the top few stacks.” Gutshot once conducted an in-depth interview with Kapoor and you can read that here.

Yesterday’s chop would’ve been a good one for both of Kapoor and Runner1, as there were quite a few talented players participating. One of them included Zarvan Tumboli aka ‘BolAuntyAuKya’ who finished 4th for INR 58,730. Sumit Sapra also finished in the money, ending 15th for INR 10,500.

This new tournament offering seems to be a popular one among players and you can keep reading GutshotMagazine.com for updates on all big stories from the Indian poker scene.