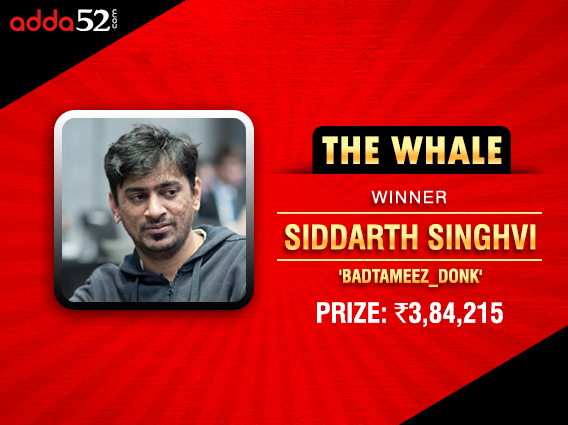 
Friday night means the weekend is nearing and it also means that there are a lot of high-value poker tournaments taking place across different platforms in India. On Spartan, Arjanveer Singh was in the spotlight for winning The Elite High Roller while a major tournament was taking place on Adda52 as well last night.

The Whale 6-Max tournament takes place on Adda52 every Friday at 8pm, with a buy-in of INR 7,500 and a massive advertised prize pool of INR 15 lakh. Many top pros would’ve been a part of this field, but the one to come out on top of the field was Siddarth Singhvi aka ‘badtameez_donk’, who won the massive top prize of INR 3,84,215.

A total of 202 entries registered to the tournament but only the top 12 were eventually paid out a minimum cash prize of INR 26,250. Also cashing out were players like Arjanveer Chadha aka ‘arjan30’, Anish Patra aka ‘anishpatra’, Sahil Mahboobani aka ‘ImHighIshove’ and Abhinav Iyer aka ‘checkshove’, who eventually finished runner-up for a prize of INR 3,50,785.

Singhvi is a regular online player who has many poker titles to his name, including winning three titles in two days at the August edition of the SSS series on Spartan. Iyer too has many victories online, including INR 4.9 lakh he recently won for shipping the Paycheck tournament on Adda52 less than two weeks ago and their Millions tournament in June this year.

In June this year, Singhvi also won an all-expense paid ‘ROLL TO RUSSIA’ Package trip to watch the Football World Cup Final Live in Russia from Adda52 itself. He clearly has a number of victories online and this surely won’t be the last we hear about his poker achievements. Keep reading GutshotMagazine.com for more updates on the top poker tournaments in India.