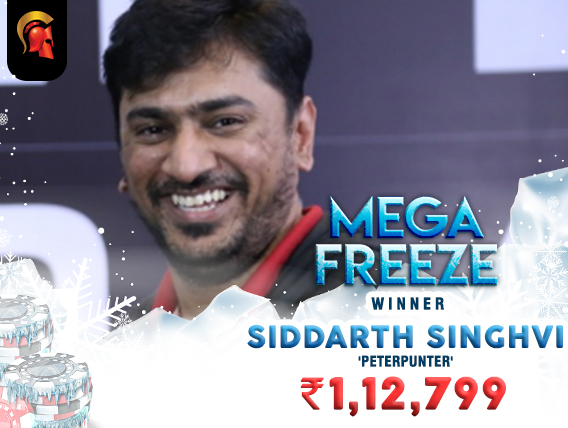 
Since the last few days, Spartan Poker, one of the leading brands of the Indian online poker industry, has shaken a few things which were regular. They replaced the Saturday feature tournament with another one called Saturday Social, which Chirag Sodha won. They have even introduced some new events for March.

Last night’s feature tournament on Spartan was Mega Freeze INR 6 Lakhs GTD. The tournament began on the platform at 7.30 pm in the evening and was wrapped up by 12.50 am early morning today. The field amounted 102 unique players and no re-entries since the tournament is a freezeout format so only one entry per player is allowed.

The player to beat the field and emerge victorious was acclaimed grinder and regular Siddarth Singhvi aka ‘PeterPunter’ who took home INR 1,12,799 as part of a 3-way deal between him, ‘moneymaniac’ (2nd – INR 1,08,753) and ‘ruparuppi’ (3rd – INR 1,06,647). The latter two also took home a good cash prizes which weren’t far away from the winning amount itself.

The winner Singhvi is a well-known community entity and his record is very impressive. He has won major tournaments in the past on all big platforms in the scene. Recently, in December last year, he won a chance to play with Finnish poker legend Patrik Antonius in Goa. Among his recent online wins include winning an Adda52 Vegas package worth INR 2 Lakhs and winning Spartan Elite, both in this year.

Singhvi is one of the players that already have a fat bankroll and don’t need any more additions to play poker, but this amount he earned yesterday will prove to be helpful to him in coming time, when he’ll be hoping to convert it into more big wins and deep runs.

There were a lot of pros and regs in contention but the only a few regs featured in the money. Some of them include ‘LuckyBhai$’ who won Spartan Big Daddy last Sunday. Others include Goonjan Mall aka ‘gmtesting’ (14th – INR 10,800) and Sagar Choudhary aka ‘lolMinions’ (15th – INR 10,800). Keep reading GutshotMagazine.com for similar tournament results, updates and more.