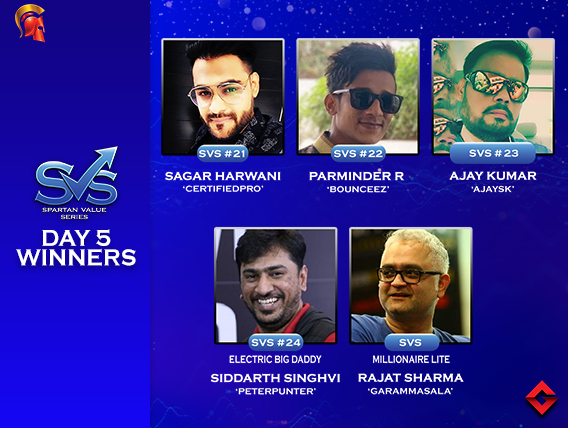 
Specially designed for the low/mid-stakes players, the February edition’s Spartan Value Series (SVS) concluded yesterday on Spartan Poker. The series that guaranteed INR 50+ Lakhs scattered a total of 24 tournaments. Besides the regular events taking place the Millionaire Lite assuring INR 10 Lakhs to the first place also crowned its worthy winner. And here is a complete summary of SVS Day 5…

The first tournament of the day had a low buy-in of only INR 165 and 395 entries registered to the event, with the top 27 eventually being paid out a minimum of INR 592. Coming out on the top was Sagar Harwani aka ‘CertifiedPRO’ who bagged the title and also adding INR 10,105 prize money to his bankroll after the players settled for a 3-way deal which saw ‘Online Buddy’ in the second position and Ajit Arora aka ‘ace_bob’ in the third place.

The buy-in for the second tournament was doubled to become INR 385 and here, 323 entries joined the field. Only the top 27 players finished in the money and each one locked at least INR 1,200 as min-cash. Capturing the first-place prize money was online reg Parminder Randhava aka ‘Bounceez’ after the players struck a heads-up deal which saw ‘momstacos’ in the runner-up position. Randhava added another title to his poker career along with the prize money.

At 4 pm, Millionaire Lite hosted the third starting flight which drew a massive field of 1,166 players after paying INR 1,650 each. It was Rony Chowdhury aka ‘ChipTricks’ to accumulate the largest stack of 2.53 million who became the overall chip charge progressing with the remaining survivors to Day 2. Chowdhury was followed by Suresh Kolli aka ‘oil_trader’ bagging 2.24 million on Day 1C.

The third event began at 5 pm which collected INR 1.70 Lakhs in prize pool and only 20 places received a paycheck out of 243 entries. It was Ajay Kumar who eliminated online reg Wilson Yomso aka ‘PokerBadger’ in heads-up to seize the SVS title along with winner’s prize money.

In level 31 of the tournament, Kumar had 5♥ A♥ and was up against Yomso with A♦ T♦. Pre-flop saw the entire stack of latter in the middle and a call from Kumar. Kumar flopped a flush when the board opened T♥ K♥ 2♥ J♣ 9♠ and railed out Yomso in the second place.

Siddarth Singhvi outlasted a field of 475 entries to take down the final event of SVS on Spartan Poker. Each entry chipped in INR 1,650 that eventually generated a final prize pool of INR 7.12 Lakhs and the top 39 finishers were assured at least INR 4,916 min-cash. Playing under the username ‘PeterPunter’, Singhvi defeated ‘TamilSuperKing’ in heads-up to attach another title to his already crowded poker cap.

By the time the tournament reached level 49, Singhvi (5♦ 6♠) had accumulated 4.6 million chips and was much ahead of ‘TamilSuperKings’ (J♥ 6♠) who had 75k chips. The latter went all-in and got a call from Singhvi who rivered trip threes when the board ran 3♠ 4♥ 2♥ 5♣ 3♣ and eliminated his opponent in the runner-up position.

Spartan Poker hosts Millionaire Lite each month and this time it was a part of Spartan Value Series (SVS) which pulled out a total of 2,448 entries from all three starting flights. It was Rony Chowdhury who resumed with the remaining survivors to battle it out on Day 2. After long intense hours of grinding session, it was a well-known figure in the industry Rajat Sharma aka ‘Garammasala’ to capture the ultimate title after eliminating Bhanu Prakash aka ‘spectre’ in heads-up. To read more, click here.

For more updates on online and live poker tournaments around the world, stay tuned to GutshotMagazine.com.