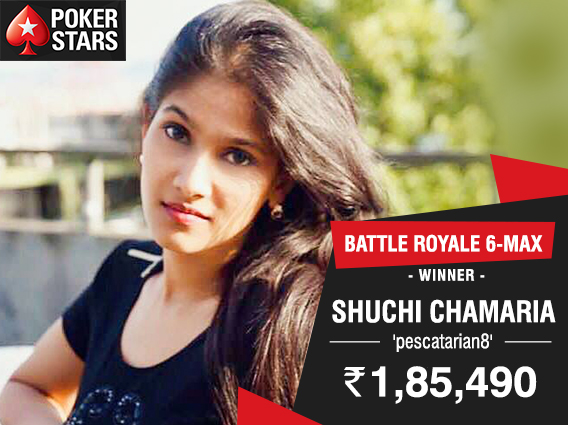 
It was another day well spent for Shuchi Chamaria, an up and coming poker player who is doing well recently, both on live and online felts. PokerStars India hosted one of their popular weekly offerings Battle Royale 6-max PKO INR 10 Lakhs GTD yesterday which Chamaria triumphed in. She bagged the top cash prize of INR 1,85,490 (including INR 1,20,715 as bounty).

The tournament began at 8 pm sharp on the client and was wrapped up by 3.02 am today morning. For a buy-in of INR 3,850, the tournament attracted a decent turnout of 252 entries (including 106 re-entries) to the virtual felts. The top 47 places received a pay-check (min-cash INR 3,755) and Chamaria emerged on top of this list after a long grind of a little over 7 hours.

Chamaria is better known in the community as PokerStars India Team Pro Aditya Agarwal’s wife, but that shouldn’t eclipse her own sizeable achievements. She has made plenty of deep runs in various online tournaments in the past, among them is the PokerBaazi Bout which she won last October. On live felts, she finished 4th in October’s BLT Main Event for a good INR 3.25 Lakhs. She is a noted female player in the community and stands as an inspiration to many women who are enthusiastic about poker.

Coming to the company which hosted this event, PokerStars India itself has been on the rise since they opened to the Indian market back in April last year and recently signed Nawazuddin Siddiqui as their brand ambassador. They put out commercials on public TV channels in India and paved the way for other poker brands to tap into the mainstream advertising market.